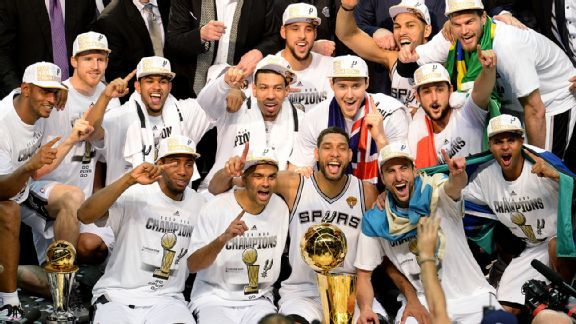 The Spurs became the fifth NBA franchise to win at least five championships.The San Antonio Spurs ended the Miami Heat’s run at a historic threepeat, and also made a little bit of a history of their own en route to a fifth title, joining the Celtics, Lakers and Bulls as the only franchises to do so in NBA history.

The Spurs became the first team since the 1988-89 Pistons to win a title the season after losing the NBA Finals in seven games.

San Antonio made their mark in emphatic fashion.

All four of the Spurs wins came by at least 15 points, outscoring the Heat by an average of 14 per game for the series.

That’s the largest points per game differential in NBA Finals history, breaking the record of +12.6 PPG by the 1964-65 Celtics in their victory over the Lakers.

The Spurs have traditionally been known for their defense, but it was their offense which was historic in the Finals. San Antonio averaged 118.5 points per 100 possessions in the 2014 NBA Finals, and had an effective field-goal percentage of 60.4 in the five-game victory. Those are both the highest marks since the advent of the 3-point line in the 1979-80 season.

Popovich and Duncan Do It Again

Gregg Popovich is the fifth coach in NBA history to win five championships. All five of them have come with Tim Duncan, with their first title coming in 1999.

According to the Elias Sports Bureau, the 15-year span between their first and most recent titles together is the longest for a player/coach duo in NBA history. It broke the record of 10 years by Phil Jackson with Kobe Bryant and Derek Fisher.

In terms of players only, the 15-year span between first and last titles for Duncan is the second-longest in NBA history. Duncan trails only Kareem Abdul-Jabbar's 17-year streak (1971-88) on that list.

Duncan Didn’t Do It Alone

Duncan, Tony Parker and Manu Ginobili have now won four NBA titles together as teammates. According to the Elias Sports Bureau, they’re the first set of at least three teammates to win four titles together since the Showtime Lakers did it with Magic Johnson, Abdul-Jabbar, Michael Cooper and Kurt Rambis.

Duncan, Parker and Ginobili have registered 117 playoff wins as teammates, the most in NBA history by a trio.

Those three, with Popovich, will likely make another run at a title in 2014-15. Parker, Ginobili and Popovich each have contracts that expire after next season, and Duncan will be back if he picks up his $10.4M player option.

In fact, the Spurs only have four unrestricted free agents on their roster from this season: Boris Diaw, Patty Mills, Matt Bonner and Damion James.