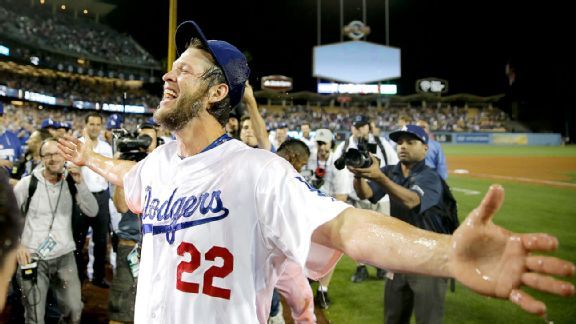 3. Kershaw is the third reigning Cy Young Award winner to throw a no-hitter, and the second to do so in a Dodgers uniform. Sandy Koufax did it for the Dodgers in 1964 and Bob Gibson did so for the Cardinals in 1971.

4. Kershaw’s teammate Josh Beckett threw a no-hitter on May 25. The last time a team threw the first two no-hitters of a season was when Cubs pitchers Burt Hooton and Milt Pappas did it in 1972. Before Kershaw and Beckett, the last Dodgers to throw no-hitters in the same season were Carl Erskine and Sal Maglie in 1956.

5. Kershaw's no-hitter came 24 days after Beckett’s no-hitter. Per Elias research, that is the shortest span between no hitters by a team since Johnny Vander Meer of the Reds did it in consecutive starts in 1938, on June 11 and June 15.

6. The Dodgers now have 22 no-hitters in their history, most of any MLB team. No other team has more than 18.

7. The most recent Dodgers left-handed pitcher to throw a no-hitter was Fernando Valenzuela in 1990. Kershaw is the fifth Dodgers lefty to toss a no-hitter.

8. As for the Colorado Rockies, they were no-hit for the third time in their franchise's history. The most recent was by a Dodger (Hideo Nomo in 1998) and the other was by a lefty (Al Leiter for the Marlins in 1996).

9. Kershaw’s only blemish came from a Hanley Ramirez error in the seventh inning. Elias tells us that the last pitcher to throw a non-perfect no-hitter without any walks was Jonathan Sanchez in 2009. An eighth-inning error did in Sanchez during his perfect-game bid.

Furthermore, Elias research confirms that Kershaw is the first player ever in the history of MLB with 15 strikeouts without allowing either a hit or walk.