SportsCenter will be in the Denver Broncos camp on Thursday to visit with the AFC champs. Here's a look at the most significant statistical storylines for this team heading into the 2014 season.

2. Since Peyton Manning arrived in Denver two seasons ago, the Broncos have the best regular-season record in the NFL (26-6). They will look to win a fourth straight division title for the first time in franchise history, and will also attempt to become the first AFC West team to win a Super Bowl since 1998.

What made Manning so effective last season was that he threw the ball effectively to all areas of the field, as this image below shows. 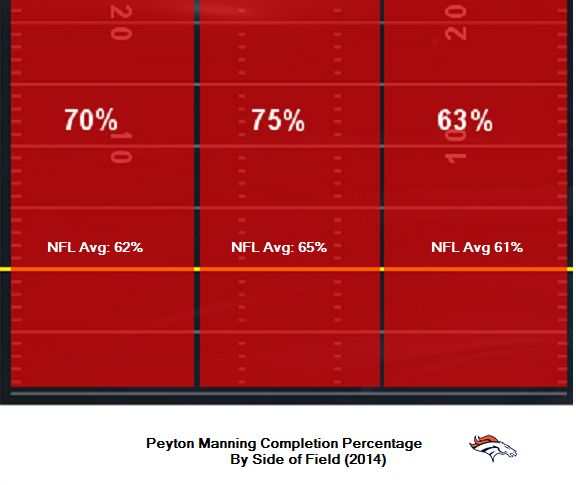 4. The Broncos lost wide receiver Eric Decker to the Jets in free agency. Decker was the Broncos’ most effective deep threat last season, leading the team with 24 receptions and 6 touchdowns on passes thrown 15 or more yards downfield. Only A.J. Green, Josh Gordon and DeSean Jackson had more touchdown catches on such throws last season.

5. The team drafted Cody Latimer and signed Emmanuel Sanders to help replace Decker, but more responsibility will likely fall on the shoulders of Demaryius Thomas. He was second in the NFL with 14 touchdown receptions last season and the team is currently negotiating with him on a long-term contract extension, since he is an unrestricted free agent after 2014.

6. Montee Ball is currently listed as the top running back on the depth chart, replacing Knowshon Moreno, who signed with the Dolphins in free agency. Ball averaged 2.55 yards after contact per rush in the team’s last eight games in 2013, the fourth most in the NFL during that span. Ball also had more rushing touchdowns (3) than Moreno (2) during that span despite having half the number of rushes.

7. Along with a returning Von Miller, the Broncos made some big acquisitions on the defensive side. Perhaps the biggest is DE DeMarcus Ware, whose 63.5 sacks in the last five seasons are second in the NFL behind Jared Allen. Miller and Ware each had at least 35 sacks from 2011 to 2013, meaning (via the Elias Sports Bureau) the Broncos will be the third team since 2000 to have two players that each had 35 sacks in the previous three years.

8. The Broncos also acquired cornerback Aqib Talib and safety T.J. Ward. Talib has 19 interceptions in the last five seasons, tied for seventh in the NFL since 2009. Ward had 112 tackles last season, second most on the Browns and 40 more than any Broncos defensive back.

9. The Broncos particularly needed help in the secondary. They had the 27th-ranked pass defense last season (254.4 yards per game) and allowed 58 completions on balls thrown at least 15 yards downfield, tied for the fourth most in the NFL.

10. The Broncos open up the season with three straight games against 2013 playoff teams: home games against the Colts and Chiefs followed by a Super Bowl rematch in Seattle in Week 3. The Broncos' five scheduled prime-time games are tied for the most in the league.