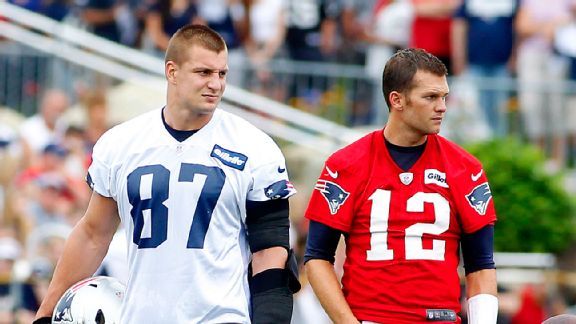 The Patriots will be counting on Tom Brady and Rob Gronkowski again this season.

SportsCenter is at Patriots training camp Friday. Here are the top things to know leading up to the 2014 season.

1. The Patriots have won the AFC East in 5 straight and 10 of the last 11 seasons. New England is the only team since the merger to win 10 division titles over 11 seasons. Some potential milestones for Bill Belichick and Tom Brady this season:

3. Last season, Tom Brady had his lowest completion percentage since 2003 (60.5) and his fewest yards per attempt since 2006 (6.9) and ranked outside the top 20 in the NFL in both categories for the first time in his career. Brady was the league’s 11th-highest rated QB last season, with his lowest Total QBR (61.1) since 2006 (first season for which data is available).

5. Along with more experience at wide receiver, a healthy Rob Gronkowski should help Brady be more productive in 2014. Gronkowski, coming off surgery to repair torn knee ligaments suffered in Week 14 last season, led all tight ends with 85 receiving yards per game last year. In his 4 seasons with the team, Brady has 42 touchdowns vs just 6 interceptions when targeting Gronkowski. Over that span, Gronkowski’s 42 receiving TDs are the most by a TE in the NFL and second most by any player behind Calvin Johnson.

7. The Patriots “bend but don’t break” defense has allowed the most yards in the NFL over the last 3 seasons (386 per game) but ranks seventh in the league in points allowed over that span (21.1 per game). A key for the unit is the ability to generate turnovers. Over the last 3 years, the Patriots lead the league in takeaways (104) and turnover margin (+51).

8. Less than a week after Pro Bowl CB Aqib Talib left for the Broncos via free agency, the Patriots signed 5-time Pro Bowl CB Darrelle Revis to a 2-year deal with $11.5M in guaranteed money. New England also signed former Pro Bowl CB Brandon Browner, who will be suspended for the first 4 games of the season, from the Seahawks. The Patriots allowed Peyton Manning to pass for 400 yards in last year’s AFC Championship loss.

9. Returning to the Patriots defense will be nose tackle Vince Wilfork, who tore his Achilles in Week 4 last season and missed the rest of the year, and defensive tackle Tommy Kelly, who tore his ACL in Week 5. From Weeks 6-17, the Patriots allowed the fourth most rush yards per game (142) and fifth most yards per rush (4.6) in the NFL. Rookie first-round pick Dominique Easley, coming off his own season-ending injury (torn ACL at Florida), is expected to push for playing time on the defensive line.