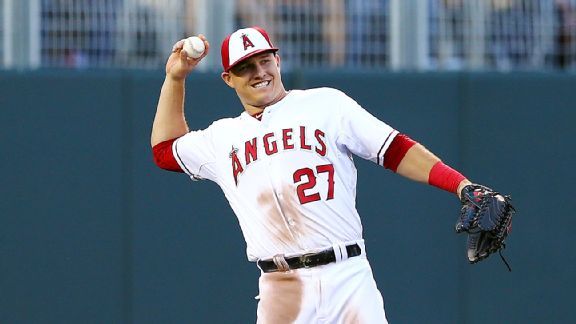 Last night the Orioles secured another walk-off win on Manny Machado's 12th-inning home run. That ties the O's with none other than the Angels at eight walk-off wins apiece this season, good for second in the majors.

Both Teams are Hot

From June 9 on, these are two of baseball's three hottest teams. The Angels are tied with the Tampa Bay Rays for the MLB lead at 29 wins during that span. The Orioles are third during that stretch with 28 wins.

The Angels have taken care of business when it counts, posting a 37-11 record against teams that are .500 or worse, the best such record in the majors. They also lead the league with 33 comeback wins.

After another late victory last night, the Orioles are now 12-3 in extra-inning games this season, the best record in baseball.

Garrett Richards will toe the mound for the Halos. Only one starting pitcher has a higher average fastball velocity than Richards this season.

Richards has allowed only one home run to a right-handed batter in 2014, the fewest of any qualified starter in the majors.

Orioles starter Kevin Gausman is no slouch in the velocity department, either. His fastball is averaging 95 mph this season, which would rank fifth among starting pitchers if he’d thrown enough innings to qualify.

Gausman (in his second season) has never faced an Angels hitter in his MLB career.

Stats About the Bats

Already off to a great start in his career, Mike Trout's next home run will be his 87th. That would tie him with Ken Griffey Jr. and Johnny Bench for seventh most before age 23 in MLB history.

Albert Pujols has had 208 plate appearances in which he put the ball in play against the shift this season, the most of any right-handed hitter in the bigs.

Meanwhile J.J. Hardy has been big at short stop with 81 home runs the past four seasons. That's second in MLB among shortstops behind only Troy Tulowitzki, who has 84.