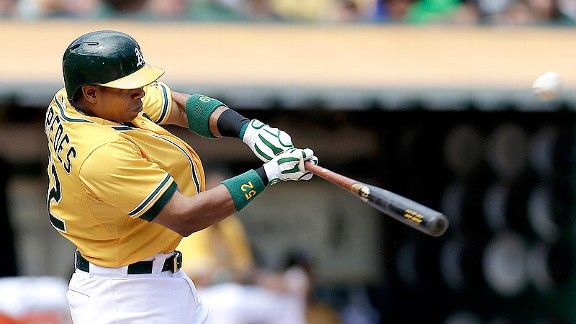 Let’s take a look at what Céspedes will bring to Fenway Park.

Although he has only had 26 plate appearances, Céspedes has not hit a home run at Fenway Park. However, he should be able to take advantage of the Green Monster as 47 percent of his hits are to left field this season.

Only three players – Brian Dozier (54 percent), Edwin Encarnacion (52 percent) and Albert Pujols (50 percent) - in the American League this season have a higher percentage of hits to the left side of the field than Céspedes.

He also brings power to a Red Sox outfield that has the worst combined slugging percentage in the majors this season. Céspedes has three more home runs than all Red Sox outfielders combined (903 fewer PA).

His 66 home runs since his rookie year is tied for 15th among all American League players (among the 167 qualified batters).

Céspedes brings nearly as many Wins Above Replacement as the top three Red Sox outfielders combined this season.

In fact, only Dustin Pedroia (3.5) has a higher WAR among Red Sox players than the 3.0 that Céspedes brings to Boston.

Red Sox left fielders have combined for minus five defensive runs saved (12th in the AL).

In addition, in Jackie Bradley Jr. (12) and Céspedes (12), the Red Sox now have the two players tied for the most outfield assists in baseball this season.