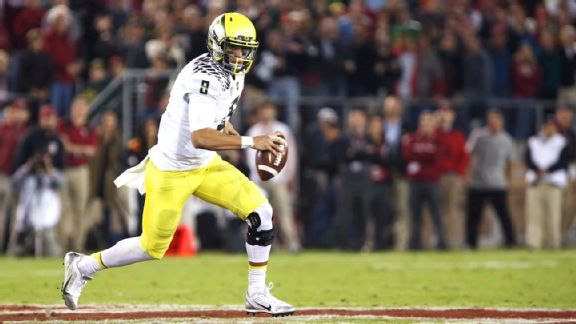 Marcus Mariota threw 31 touchdowns and four interceptions last year for Oregon.The 2014 college football season has the potential to showcase one of the most talented groups of quarterbacks in recent memory. Jameis Winston, Marcus Mariota, Brett Hundley and Bryce Petty are all being talked about as potential first-round NFL Draft picks, while Braxton Miller and Everett Golson have the chance to solidify their places in their respective school’s storied histories.

In preparation for the 2014 season, and in conjunction with interviews conducted by ESPN CFB analyst Kirk Herbstreit, ESPN Stats & Info will take a deeper look at the top QBs entering the fall. Today we examine Marcus Mariota, who enters the 2014 season with a career 23-3 record for Oregon.

Marcus Mariota’s numbers speak for themselves. Boasting a career 23-3 record as a starter, Mariota has thrown for 63 touchdowns compared with 10 interceptions. Add his 14 rushing touchdowns, and Mariota has been a dynamic force on offense and a real challenge to opposing defensive coordinators since taking the helm in the 2012 season.

Mariota posted a Total QBR of 88.0 last season, which trailed only Heisman Trophy-winning Jameis Winston. It was the second consecutive season Mariota ranked second in the FBS in Total QBR behind the eventual Heisman Trophy winner.

Mariota made great strides as a passer last season, improving his yards per attempt and his touchdown-to-interception ratio from 2012. He was especially impressive on his downfield passes, completing 58.1 percent of his passes thrown 15 yards or longer, best among Power Five Conference quarterbacks and 16 percentage points higher than in 2012.

Mariota was a different quarterback, however, after he suffered a sprained MCL in a Week 11 loss against Stanford. Before the injury, Mariota had a 92.9 Total QBR, on pace to be the third-highest single-season Total QBR in the last 10 seasons. After the injury, his Total QBR dipped to 78.3 (excluding the game vs. Stanford) and he threw all four of his interceptions in Oregon’s last four games of the season.

Additionally, Mariota was less efficient on designed runs after the injury. He averaged 13.4 yards on four designed rushes per game before hurting his knee, but he totaled four designed rushes for 11 yards in the remaining three regular-season matchups, including none against Utah in the week after his injury.

Can Mariota fight off his Cardinal demons?

Mariota’s glorious career does have one glitch: he and the Ducks are 0-2 against the Stanford Cardinal compared with 23-1 against all other teams.

Oregon Rushes Outside the Tackles
2013 Season

Stanford’s ability to keep the Ducks’ offense off the field and to contain their outside runs made it tough to open up passing lanes for Mariota. The Cardinal kept the Ducks narrow, limiting their ability to get out in open spaces.

Mariota and the Ducks will have an early test in the second week this season when they host Michigan State, the team that beat Stanford in last season's Rose Bowl. Mariota’s performance against the Spartans could be a good barometer of his progression as a complete quarterback.