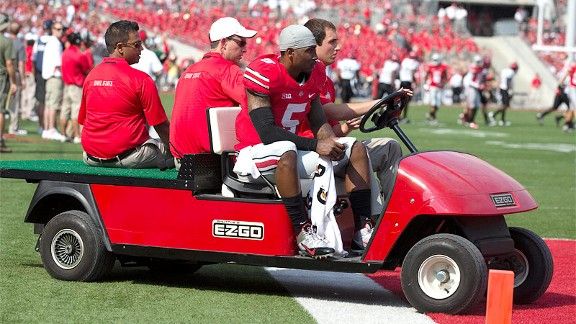 Miller was one of several early favorites to win the Heisman Trophy. He was tied for third with Georgia running back Todd Gurley on the most current Heisman Watch on ESPN.com behind only Marcus Mariota and Jameis Winston.

How valuable was Miller?

Miller was the only Big Ten quarterback to rank in the top 35 in Total QBR last season (he ranked 13th). He had the seventh-highest QBR among returning FBS quarterbacks (91.3).

Miller has been among the elite rushing quarterbacks in FBS over the past two seasons. His 2,339 rushing yards ranked second in FBS (Jordan Lynch of Northern Illinois ranked first with 3,735 yards), nearly 200 yards more than Johnny Manziel in that same time.

A knee injury in Week 2 against San Diego State hindered Miller early in the season, but he averaged 131.6 rushing yards per game in the last five games.

Miller improved incrementally as a passer from 2011 to 2013 as the chart on the right shows.

He led the Big Ten in touchdown passes and ranked second in completion percentage and yards per attempt.

Miller and Drew Brees are the only players to win Big Ten Offensive Player of the Year multiple times.

Redshirt freshman J.T. Barrett is listed as the team’s top backup. He was a four-star recruit in the Class of 2013, and was ranked the No. 11 dual-threat quarterback in that class.

Barrett’s senior season in high school was cut short by a torn ACL.

Redshirt sophomore Cardale Jones (two career pass attempts, both against Purdue) is the only quarterback other than Miller on the Ohio State roster who has attempted a pass in an FBS game.

Jones has played a total of 39 snaps against three opponents (Florida A&M, Penn State and Purdue).

Losing Miller would be one extra thing the Buckeyes' offense will need to replace.

The team is dealing with a near total makeover up front.

The Buckeyes' backfield stud, Carlos Hyde, is also gone. He was a second-round draft pick by the 49ers.

Hyde had a little more than 138 rushing yards per game, which was fifth in FBS last season. Over 57 percent of his rushes went for five or more yards, second best in FBS.

Ohio State was favored in each game in the ESPN Football Power Index, with only one of its 12 opponents ranked in the preseason AP Top 25 (at Michigan State).

Before Miller’s injury, FPI projected the Buckeyes with a 41 percent chance to win the Big Ten, nearly twice as likely as the next-closest team (Wisconsin, 22 percent).