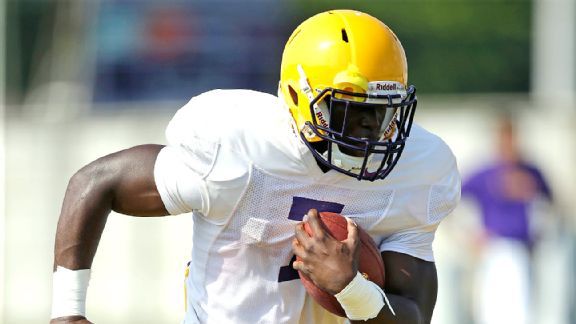 Leonard Fournette ran for 7,619 yards and scored 88 rushing TDs in his high school careerIn January, LSU landed the top recruit in the ESPN 300, running back Leonard Fournette. The New Orleans product was the first running back to top our rankings since Joe McKnight in 2007.

Fournette should be relied upon right away after the team lost lead back Jeremy Hill, who was drafted in the second round of the 2014 NFL Draft by Cincinnati. Last season Hill ran for 1,401 yards while averaging a school-record 6.9 yards per carry (minimum 200 carries). However, given Fournette’s size, speed and pedigree, he should be able to step right in to fill Hill’s role, even as a true freshman.

Fournette’s upside was described this way by RecruitingNation.com. “If he can land in a downhill, two-back offense, we see big-time production at the next level.”

If that description is accurate, Fournette landed in the right place. No BCS-AQ (automatic qualifying) team ran more often in a two-back set than LSU last season.

LSU was also fourth among BCS-AQ teams in rushing yards between the tackles (136.4 yards per game).

Hill excelled in LSU’s downhill running scheme. He led all BCS-AQ backs, averaging 105.9 yards per game in two-back sets, and his average of 7.9 yards per carry between the tackles led BCS-AQ backs (minimum 50 carries).

With Hill gone, 203 carries have been freed up, with Fournette expected to take the majority of them. Physically, the two are very similar. At 6-foot-1, 230 pounds, the freshman is listed at one inch shorter and six pounds lighter than Hill. Yet Fournette has elite speed to go with that size. Last year, he ran a 10.68-second 100-meter dash to win Louisiana’s 4A regional title.

How Successful Can He Be?

Fournette will have help in the trenches. LSU returns four starters from an offensive line that carved big holes up the middle. Last season, the Tigers’ average of 3.9 yards before contact per carry on designed runs between the tackles was second-best among BCS-AQ teams.

Les Miles isn’t afraid to use freshmen running backs either. Two years ago, Hill led the team in rushing and set a school freshman record in touchdowns with 12. As the schedule got tougher, Miles rode his freshman more. In LSU’s last seven games – five against ranked opponents - Hill averaged 19.5 carries per game.

Most Rushing Yards by a Freshman
SEC History

LSU did not sign a single running back in last year’s recruiting class primarily because of its pursuit of Fournette, so the Tigers should ride their freshman heavily. Over the last two seasons, four different SEC freshmen have rushed for 1,000 yards.

Only one Tiger freshman has rushed for 1,000 yards in a season, Justin Vincent in 2003. That year, Vincent was named most valuable player of LSU’s BCS Championship Game victory over Oklahoma. LSU hopes that Fournette can have a similar impact this season.

"We decided not to take a tailback," LSU head coach Les Miles said at his signing day press conference in February. "We will need a great one, one of those guys who has great speed, and ball skills and can run with power, and I'm thinking of him right now."