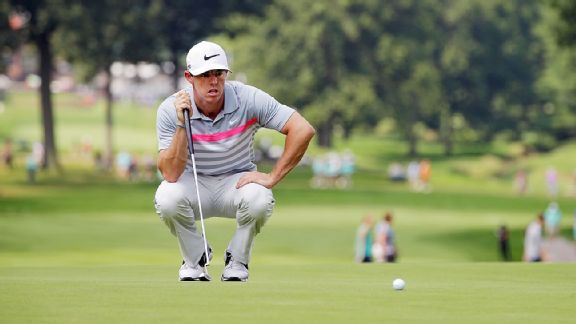 Rory McIlroy is 1 of 4 players to rank among the TOUR's top 10 in SGT2G in each of the last 3 seasons.In 2011, the PGA TOUR introduced a new metric, Strokes Gained: Putting (SGP) to better evaluate players’ putting performance.

Now, in an attempt to measure who’s the best on all the parts of the game that take place before the putting surface, the TOUR has added Strokes Gained: Tee-To-Green (SGT2G).

Using historical putting data, SGP assigns a value to a player’s putting performance in a given round (i.e. +1.7 strokes), meaning the rest of the player’s strokes gained (or lost) for the round are attributed to his play from tee to green, or SGT2G.

If Rory McIlroy gains 4.0 shots on the field in a given round, and his SGP is +1.5, then simple arithmetic says that his SGT2G is +2.5 for that round.

Winning happens off the green

The old saying “Drive for show, putt for dough” suggests that the putter is the most important club in the bag, but SGT2G indicates otherwise.

Of the top five players on the PGA TOUR in SGT2G this season (entering the BMW Championship), three have won at least once, and they have combined for five victories and 38 top-10 finishes.

Compare that to just one win (Matt Every) and 21 top-10 finishes combined for the top five players in SGP.

In each of the last five years, the PGA TOUR Player of the Year ranked fourth or better in SGT2G. But only two of those players (Tiger Woods in 2009 and Luke Donald in 2011) also ranked inside the top 20 in putting.

In 2012, when he won four times on TOUR, Rory McIlroy ranked a dismal 82nd in strokes gained putting.

Length off the tee certainly helps in this category (two of those four players are averaging more than 300 yards per drive on the PGA TOUR this season), but it’s not everything. Rose (293.9) is 58th on TOUR in driving distance, and Furyk (278.7) is 161st. In fact, Furyk continues to rank among TOUR’s elite in SGT2G, despite finishing the year outside the top 150 in driving distance every year since 2004.