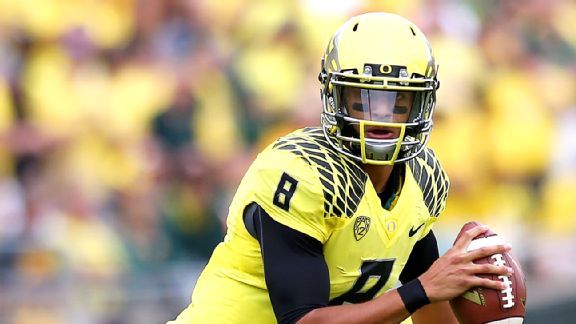 Marcus Mariota is one of the top dual threats in the sport.Entering Week 1, Marcus Mariota was the favorite to win the Heisman, according to the ESPN Heisman Watch.

Mariota did not disappoint in his first game. He was responsible for 310 yards of total offense and four touchdowns, despite not playing in the second half of Oregon’s 62-13 win against South Dakota State.

Throughout his career, Mariota has been one of the most efficient and consistent FBS quarterbacks. He has ranked second in the FBS in Total QBR in each of the last two seasons.

His 87.3 career Total QBR is the second-best for any player with at least 20 starts in the last five seasons, behind Johnny Manziel.

The Ducks have been one of the most efficient offenses in the FBS, ranking third in this category in each of Mariota’s first two seasons.

They have scored on an FBS-high 45 percent of their drives since Mariota became the starter, best in the FBS.

When the ball is snapped to Mariota, Oregon averages 7.5 yards per play, the second-best for any quarterback who has taken at least 500 snaps (Jameis Winston is No. 1).

The Ducks have gained at least 10 yards on 28 percent of their plays with Mariota at quarterback, which is also second to Florida State and Winston.

Mariota has been responsible for 82 touchdowns in his career, most for any Pac-12 player in the last three seasons and sixth-most for any FBS player.

During that time, he was responsible for at least three touchdowns in a game 18 times; only former Northern Illinois quarterback Jordan Lynch has had more such games.

Mariota takes care of the ball

Mariota has 10 career interceptions, tied for the third-fewest for any player with at least 20 starts during the last three seasons.

The only active player with at least 20 starts and fewer interceptions than Mariota is Navy quarterback Keenan Reynolds, who has 502 fewer attempts. Mariota set the Pac-12 record with 343 consecutive passes without an interception.

Mariota has rushed for 1,510 yards in his career and has averaged 7.3 yards per carry. Almost half (49 percent) of his carries have been designed quarterback runs.

On such plays, Mariota leads all Power Five quarterbacks with 10.1 yards per rush and is second to Braxton Miller with 17 runs of 20 yards or more.

Mariota is often not touched on these plays until he is well past the line of scrimmage, as he averages 8.2 yards before contact.