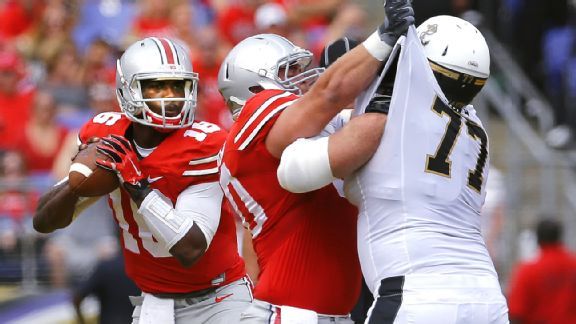 Ohio State's improved blocking in the 2nd half helped open things up for QB J.T. Barrett in Week 1.Ohio State was a different offense in the second half of its season-opening win over Navy, due in part to the play of its offensive line and the adjustments its coaching staff made in playcalling.

The Buckeyes ran on 21 of their 25 second-half plays. They averaged 3.8 yards before contact per rush in the second half, two more yards than they averaged in the first half.

Barrett’s average pass in the second half traveled 18.3 yards downfield, including 36 yards on his 80-yard touchdown to Devin Smith. All four of his second-half passes were off play action.

One of the main reasons for Ohio State’s struggles was its offensive line.

The Buckeyes had their fewest rushing yards (66) in the first half of a game in the last two seasons and tied for their most rushes (6) that failed to gain yards.

Ohio State’s inability to block factored into the play calling. J.T. Barrett was eased into the game with eight of his first nine passes coming at or behind the line of scrimmage. His average pass in the first half traveled just 2.8 yards and all but six of his 96 passing yards in the half came after the catch.

Will it be enough against Virginia Tech?

Ohio State will face Virginia Tech on Saturday, a team that brings in one of the best rushing defenses in the nation. Since the start of last season, the Hokies rank ninth in the FBS in opponent rushing yards per game (108.4) and eighth in opponents yards per rush (3.2).

If Ohio State cannot run the ball, it will put Barrett into a position to make plays on third down - something he did not do against Navy. He attempted two third-down passes against the Midshipmen with neither resulting in a first down.

For the game, the Buckeyes ran on six of their eight third downs, despite the fact that their average distance to go was 6.9 yards. They ended up converting on 25 percent of their third downs, their fewest conversions in any game that they won under Urban Meyer.

This could be an issue Saturday, as Virginia Tech has allowed opponents to convert 28 percent of their third downs the last two seasons, second best in the FBS behind Louisville (25 percent).

According to ESPN’s Football Power Index, Ohio State has an 80 percent chance to win Saturday. FPI is a predictive look at overall team strength. FPI ranks every FBS team by the likelihood that it would beat an average team on a neutral field.

The Buckeyes will need to play like they did in the second half against Navy if FPI’s projection is going to be correct.