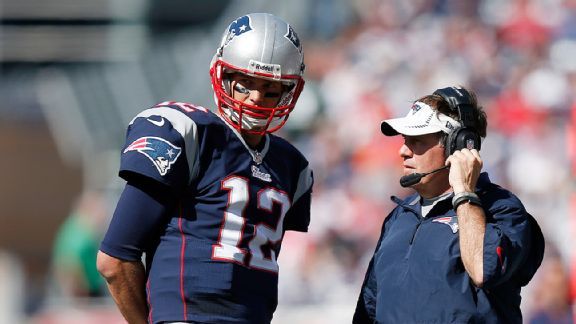 Tom Brady and Bill Belichick have some work to do to straighten out the Patriots.The New England Patriots have fallen to No. 16 in the ESPN.com NFL Power Rankings, their lowest ranking since Week 7 of the 2008 season (17th), when Matt Cassel was filling in for an injured Tom Brady.

The Patriots host the Bengals in Week 5, one of two remaining unbeaten teams in the NFL this season (Cardinals) and the team allowing the fewest points per game this season (11.0).

If the Patriots want to avoid a 2-3 start and a further slide in the rankings, they’ll need better play from their offense, specifically their quarterback.

Expected points added (or efficiency) measures the impact of every play on each team's potential points, accounting for such factors as down and distance, field position and other situational factors.

If this trend continues, it would be the first time since 2006 the Patriots defense outweighed the offense (that offense did rank sixth that season).

Contributing to the low efficiency is the fact the Patriots have converted only 36 percent of their third downs, 27th in the NFL. That would be the lowest of the Brady-Belichick era for the Patriots.

With the offense struggling, Brady’s decline in play becomes the focal point.

Brady has also averaged just 5.8 yards per attempt (35th out of 36 qualified QBs), better than only Raiders rookie Derek Carr.

Contributing to the low completions and yards per attempt is the Patriots inability to stretch the field.

Brady has completed only one of 16 attempts thrown 20 or more yards downfield this season (6.3 percent). No other quarterback is below 15.0 percent completions on those passes this season.

Brady not the only one to blame

Inconsistency in the receiving corps has likely played a factor in that, as no receiver outside of Edelman has been on field for a bulk of the team’s snaps.

The pre-season trade of guard Logan Mankins may be looking like a big mistake too. Brady has been pressured on 26 percent of his dropbacks, which would be the highest since that data became available in 2009.

He’s also been sacked on 6.2 percent of his dropbacks, which would be his highest since 2001. This had led to three lost fumbles for Brady, same as he had in the previous two seasons combined.

Belichick at fault too?

As one of the key decision makers in personnel, Bill Belichick faces some blame in the Patriots current scenario as well.

In the past five drafts, the Patriots have taken more quarterbacks (two) than offensive linemen (one - Nate Solder) in the first three rounds.