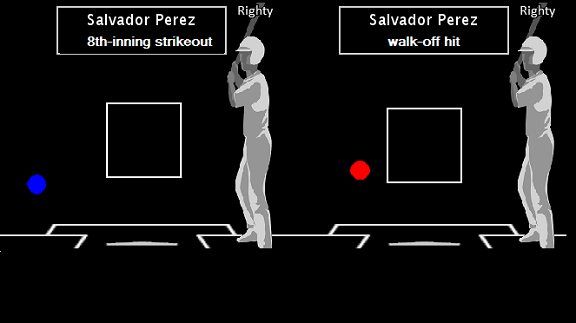 Sal Perez went from potential goat to baseball hero in the span of a couple of at-bats.Welcome to the baseball postseason.

Welcome to a postseason that begins with one of the sport’s all-time epic games, which ended on Salvador Perez’s 12th-inning walk-off hit for the Kansas City Royals. it went just past the glove of the top-fielding third baseman in baseball this season, Josh Donaldson of the Oakland Athletics (who led major league third basemen with 20 defensive runs saved.

This was only the second time a winner-take-all postseason game ended in the 12th inning or later. The other was in 1924 of the World Series when the Washington Senators made Walter Johnson a winner. Legend has it that a ball hit a pebble and bounced over the head of the New York Giants third baseman for the winning hit in the 12th.

It was the first walk-off hit in a postseason winner-take-all game since Nyjer Morgan had one for the 2011 Milwaukee Brewers against the Arizona Diamondbacks.

Perez was 0-for-5 in the game prior to that at-bat, with a key strikeout in the eighth inning. He had only one regular-season walk-off hit in his career, against the team the Royals will face next, the Los Angeles Angels. Both the strikeout and hit came against pitches out of the strike zone (as you can see in the image above). Perez chased pitches out of the strike zone more than any hitter in the American League (42 percent of the time).

Welcome to the postseason, Christian Colon, who had the tying hit and scored the winning run. Colon had played in only one of the Royals 24 regular-season games since Sept. 3 due to a broken finger.

Welcome to the postseason, Eric Hosmer, who started the 12th-inning rally with a triple off the left-field fence. Hosmer had only one triple in the 2014 regular season. He became the fourth player to reach base at least five times in his postseason debut, joining Alan Trammell (1984 Tigers), Frank Thomas (1993 White Sox) and Johnny Damon (2001 Athletics).

Welcome to the postseason, Brandon Finnegan, who pitched 2 1/3 innings of relief to extend the game in extra innings. Finnegan was the Royals first-round pick in this year’s draft after pitching in the College World Series for TCU. He was the only first-round pick from the 2014 draft to pitch in the majors this season.

Welcome to the postseason for a different style of baseball, in which speed can overcome power. The Royals tied a postseason single-game record with their seven steals, matching the mark set by the 1907 Cubs and the 1975 Reds.

They overcame a one-man show from Athletics slugger Brandon Moss, who had two home runs and an Athletics record five RBIs. He's only the second player in postseason history to have five RBIs in a loss, joining Milt Thompson of the 1993 Phillies (in a 15-14 loss to the Blue Jays).

Overall, it's a heck of a welcome back to the postseason to the Royals. By our count it was 10,565 days and 42 minutes between postseason wins for them.