Rain halted the American League Championship Series for a day, but the Baltimore Orioles and Kansas City Royals get back at it Tuesday.

Here are a few notes delving inside the key matchups we expect to see.

Eric Hosmer is hitting .435 this postseason, with two home runs and seven RBIs, but his strong play actually goes back to before October. He’s hitting .335 since the beginning of July after a rough start to the season.

Hosmer is 7-for-17 with two home runs in his career against Chen.

Chen might want to rethink his strategy against Hosmer, whom he has traditionally pitched away at a high rate.

Of his 59 pitches to Hosmer, 42 were on the outer half of the plate or off the outside corner.

But that plays to Hosmer's strengths in the playoffs. 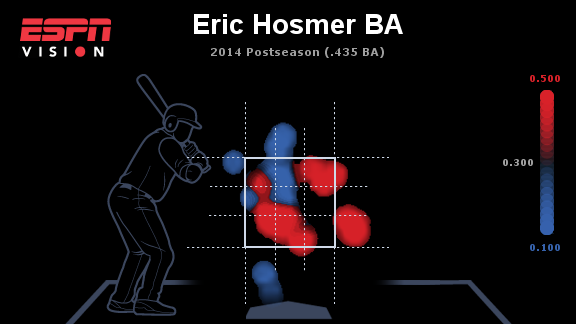 Hosmer is 6-for-8 in plate appearances ending with an outer-half pitch this postseason, including a triple against the Oakland Athletics and a home run against the Los Angeles Angels.

The problem for Chen in making any sort of adjustment? Both of Hosmer’s home runs against him came on inside pitches.

There are seven Orioles hitters with at least 10 at-bats against Jeremy Guthrie. All seven are hitting .250 or below in these at-bats. Adam Jones has significantly struggled.

Jones is 1-for-12 against Guthrie, though with only two strikeouts. Jones’ problem is that he hasn’t been able to square Guthrie up. He has hit two fly balls and eight grounders.

It will be interesting to see if the Royals adjust their defense at all for Jones. All eight of those ground balls were hit well to the left of the second base bag.

Guthrie will want to be careful when locating his fastball, which averages just below 92 mph, to Jones.

The Orioles had a .546 slugging percentage against fastballs at 92 mph or slower in the regular season, 45 points higher than the second-highest rate in the league. Jones helped that effort with eight home runs against those pitches.

The Royals' bullpen has been everything it was billed to be, particularly the combination of Kelvin Herrera, Wade Davis and Greg Holland.

Davis has been terrific the past two games, with five strikeouts in three scoreless innings.

Davis has amped up his fastball, hitting at least 97 mph with 32 of his 59 fastballs this postseason. During the regular season, 30 percent of his fastballs were 97 mph or faster.

The Royals are the seventh team to take a 2-0 lead in a best-of-seven ALCS by winning the first two games on the road. Each of the previous six teams advanced to the World Series.

Only three teams have overcome a 2-0 deficit in any best-of-seven LCS: the Royals over the Toronto Blue Jays, St. Louis Cardinals over the Los Angeles Dodgers in 1985, and the Boston Red Sox over the New York Yankees in 2004.

The Royals have won six straight games to start the postseason. Another win would tie the 1976 Cincinnati Reds and the 2007 Colorado Rockies for the longest winning streak to start a postseason in major league history.