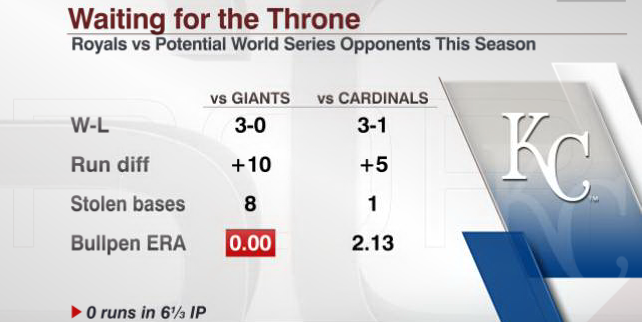 The Royals played well against both the Cardinals and Giants in 2014.The Kansas City Royals are headed to their third World Series after finishing a sweep of the Baltimore Orioles in the American League Championship Series.

This was a series in which the Royals excelled at hitting, pitching and fielding. They may have been only a little bit better than the Orioles, but it proved to be enough to put them into the Fall Classic for the first time since they beat the St. Louis Cardinals in 1985.

The Royals became the first team to start a postseason with eight straight wins (something only possible since 1985 when the LCS expanded to a best-of-seven format). They join the 2007 Colorado Rockies as the only teams to sweep the division series and championship series in the same season since baseball went to a three-round format in 1995.

Royals manager Ned Yost is the first manager to win his first eight postseason games. His eight wins tie Dick Howser for the most in Royals history.

Royals outfielder Lorenzo Cain hit .533 with eight hits and five runs scored in the series. He's the first player to hit all of those benchmarks in an ALCS since Placido Polanco and Milton Bradley each did it in 2006.

Royals relievers had an incredible series, going 3-0 with two earned runs allowed in 16 innings, good for a 1.13 ERA.

They are the second team to have at least three wins and an ERA that low in an LCS, joining the 1988 Oakland Athletics' bullpen, which was 3-0 with an 0.61 ERA in a sweep of the Boston Red Sox.

The Elias Sports Bureau notes that this year's ALCS was the first series in postseason history in which no starting pitcher, for either team, threw at least six complete innings.

Hitting the ball hard was no guarantee

Inside Edge, a video-tracking service that provides data to teams and media, rates every batted ball as either hard-hit, medium-hit or soft-hit.

The Orioles had more hard-hit balls than the Royals in this series (22 to 20). But the Royals hit .789 on their hard-hit balls (major league average is usually around .700). The Orioles, thanks to plays such as the terrific catch Alex Gordon made in Game 4, hit only .429 (nearly 300 points below their .723 regular-season batting average on hard-hit balls).

There were 37 innings played in this series, 30 of them ended with the score tied or the team were within one run of each other.

Teams to sweep ALCS
Since 1985

The Royals will not play again until next Tuesday when the World Series opens in Kansas City. That’s not necessarily a good thing.

In recent years, punching your ticket first has not correlated to winning the World Series.

In seven of the past eight years, the first of the two teams to advance to the World Series has lost the series. The exception was the 2008 Phillies.

And as the accompanying chart on the right notes, no team that has swept a best-of-seven ALCS has won a World Series.