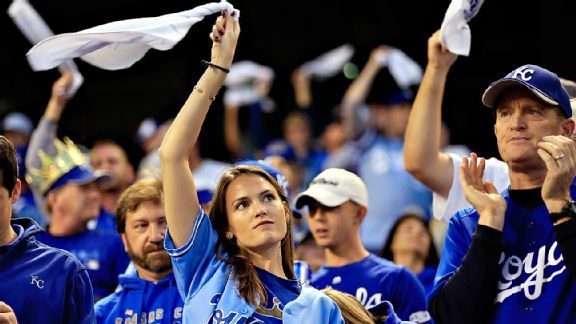 The World Series returns to Kansas City on Tuesday night for Game 6. The Giants lead the series 3-2.

The San Francisco Giants and Kansas City Royals will meet in Game 6 of the World Series Tuesday night, with the Giants trying to wrap up another title and the Royals trying to keep their magical season alive.

The Giants are trying to win their third World Series in the last five seasons. They’d be the fifth franchise to do that and the first since the Yankees in 1996-2000.

The Royals are trying to do what they did in their last World Series appearance in 1985: win Game 6 to force a Game 7.

Getting to Game 7 has a significant historical meaning.

The home team has won nine straight Game 7s in the World Series. The last team to win Game 7 on the road was the 1979 Pirates in Baltimore.

Jake Peavy, who will start Game 6 for the Giants, has a 7.05 ERA in his postseason career. That is the highest postseason ERA among active pitchers and the second highest all time (minimum 35 innings pitched).

The Royals are 3-0 in games started this postseason by Yordano Ventura, who gets the start Tuesday night.

Ventura had the fastest average fastball velocity among starters this season at 96.8 mph.

But the Giants have had success against heaters this postseason. The Giants are hitting .319 against pitches of 95 mph or faster this postseason, best among playoff teams, including 6-for-16 (.375) against Ventura in Game 2.

Keep an eye on: Giants versus pitches out of strike zone

One of the advantages the Giants hold in this series is success against pitches out of the strike zone.

The Giants have done so without going considerably beyond their means. They chased 31 percent of pitches out of the strike zone during the regular season. Their chase percentage in this series is 32 percent.

Pablo Sandoval has four hits against pitches out of the strike zone this series. That’s not unusual. He had a major league best 70 such hits during the regular season.

But some of Sandoval’s success seems to have rubbed off on his teammates. Seven of his teammates have a hit against an out-of-the-zone pitch this series, including Brandon Crawford, whose second such hit scored Sandoval in the fourth inning of Game 5.

Why is that notable?

Crawford had only eight hits against pitches out of the strike zone during the regular season, tied for the fewest in the majors among the 150 players who saw the most out-of-zone pitches in 2014.

The Royals are hitting .221 in the Series. Left fielder Alex Gordon is among those struggling most, with only two hits in 20 at-bats. But he's 10-for-30 (.333 batting average) in his career against Peavy.

One batter Peavy has handled is Eric Hosmer, holding him to four hits in 22 at-bats. Hosmer, who was hitting .448 (13-for-29) this postseason entering the World Series, is hitting .263 (5-for-19) in five games against the Giants.

Stat of the night: Shutout in Game 5 is reason to celebrate

Since World War II, five pitchers have thrown a shutout in Game 5 of a World Series tied 2-2. Madison Bumgarner is the most recent to do so.

In the previous four instances (each of which happened more than 40 years ago), each pitcher's team lost Game 6, but won the Series in the final game.