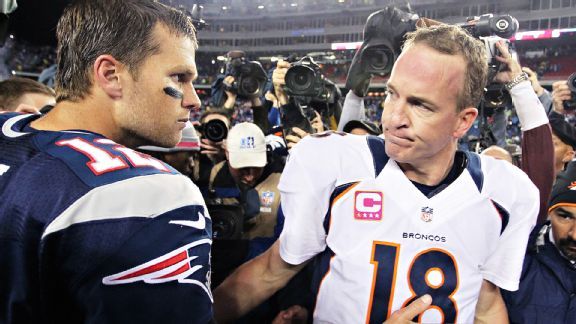 For the third straight regular season, Tom Brady hosts Peyton Manning in Foxborough.The two oldest starting quarterbacks in the league this year will meet Sunday for the 16th time. Thirty-eight-year-old Peyton Manning and 37-year-old Tom Brady, with a combined 442 starts and 32 years of professional experience between them, should be facing two opponents each Sunday: opposing defenses and Father Time. Only eight of the 118 4,000-passing yard seasons since the merger were by quarterbacks age 37 or older, and given the high level of their primes, Manning and Brady should be declining.

Except they aren’t (at all). No one’s played better in October than Manning and Brady.

Career resumes and supporting casts aside, Total QBR gives a slight edge to Manning in October, but the season-long advantage is sizable (90.1 to Brady’s 75.4) for the reigning AFC champion.

Bill Belichick said Tuesday there were “no weaknesses in [Manning’s] game,” but his own quarterback has played pretty well, too. Here’s how Manning and Brady match up in a few specific areas of focus for quarterbacks.

Manning is 14-of-27 (51.8 percent) for 550 yards, six touchdowns and no interceptions on throws at least 20 yards downfield, leading the league with a plus-six touchdown-to-interception differential and 20.4 yards per attempt average on deep throws.

He’s one of three quarterbacks with at least 25 downfield attempts and no interceptions.

Brady really struggled to connect downfield in the first four weeks, but he’s been on fire since.

Brady connected on one of his first 17 deep throws this season, but has connected at least once in each of his past four games.

Manning has the lowest pressure percentage in the league (sacked, under duress or hit while throwing on 15 percent of dropbacks) because of his ability to get the ball out quickly. No quarterback has a lower time-in-pocket average than Manning’s 2.11 seconds.

Brady’s average time in pocket is 2.19 seconds, fourth fastest in the league. Brady’s hardly holding on to the ball too long, but offensive line inconsistency has left him more susceptible to pressure (23 percent of dropbacks, 14th in NFL).

Six different Patriots have played at least 100 snaps at guard or center this year, most of any team in the league (Denver’s used the minimum three).

One by-product of the increased pressure on Brady has been fumbles. The only quarterback with more fumbles than Brady (six) is Jay Cutler (nine). Manning struggled with fumbles in 2013 (10), but has fumbled only twice this season.