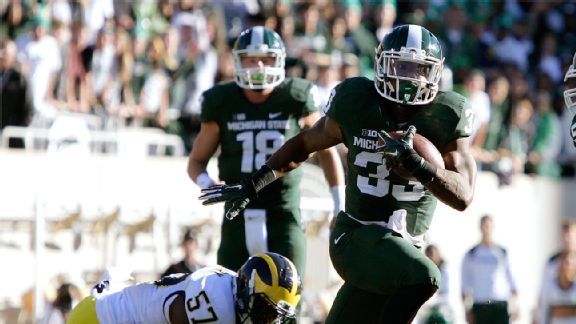 Michigan State’s Jeremy Langford consistently posts 100-yard games against Big Ten opponents.Defense is often the first word associated with Michigan State football. The Spartans are one of two teams (Alabama) to finish each of the previous three seasons ranked in the top 10 in points per game allowed and defensive efficiency. The offense was often an afterthought, but things are different this season.

Michigan State is averaging the fifth-most points per game in the FBS (45.5) and has already scored one more offensive touchdown (47) than it had all of last season. Its offense is adding nearly seven more points to its net scoring margin than in any other year since Mark Dantonio was hired before the 2007 season.

What has made the offense so successful?

Connor Cook has led the way for Michigan State’s passing game. He leads the Big Ten in Total QBR (81.9) and yards per attempt (9.4) this season. Cook has also been the best downfield passer in the conference; he has eight more completions on passes thrown 15 yards or longer than any other Big Ten player.

On the ground, Jeremy Langford has been one of the most consistent backs in the nation. He has rushed for at least 100 yards in 12 consecutive conference games, tied with Arizona’s Ka’Deem Carey for the longest streak in at least the last 10 seasons. Langford has averaged 3.0 yards after contact per rush in conference play this season, second-best among Big Ten running backs (min. 50 attempts).

The third piece of Michigan State’s dynamic trio is wide receiver Tony Lippett. He has a Big Ten-high 889 receiving yards and is averaging 21.2 yards per reception. On passes thrown 15 yards or longer, he leads the conference in receptions (16) and touchdowns (six).

So, although Michigan State’s defense has received the bulk of the attention, it now has an offense to hold up its part of the bargain. On Saturday, the Spartans may need that offense to produce against an Ohio State team that has scored at least 50 points in five of its last six games.