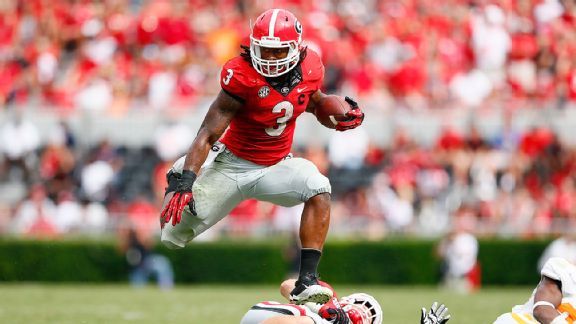 Todd Gurley can make a big impact in his return.Nick Chubb has done an admirable job stepping in for the suspended Todd Gurley in Georgia’s last four games. In his time as the starter, Chubb was 10th in the FBS in rushes per game (25.5), fourth in rush yards per game (167.8) and tied for fifth in rushes of at least 10 yards (17). He has rushed for at least 140 yards in each game.

As good as Chubb has been, the numbers appear to show that Gurley has been better. Regardless, perhaps the most important thing for the Bulldogs is that they have both of them available heading into Georgia’s final SEC game, Saturday against Auburn.

During Gurley’s absence, Chubb has been responsible for 61 percent of the Bulldogs’ rushes and 78 percent of their rush yards, both highest in the SEC since Week 7. Georgia posted a 3-1 record during that time. The loss was against Florida, when all Chubb did was run for 156 yards and average 7.4 yards per carry.

With Gurley as its starter, Georgia averaged 288.8 rush yards per game (second in the SEC), which is almost 75 more than with Chubb as starter. In the first six weeks of the season, Gurley led the SEC and ranked in the top 3 of the FBS in most statistical rushing categories.

He showcased his breakaway speed in the season opener against Clemson, totaling 293 all-purpose yards and four touchdowns (three rushing, one on a kick return). Gurley became the fourth player in the last 10 seasons to have at least three rushing touchdowns and one kickoff return touchdown in a game. His 198 rush yards against Clemson are even more impressive considering the Tigers have not allowed more than 80 rush yards to any other player this season.

Gurley rejoins the Bulldogs for a pivotal matchup against Auburn. Although Georgia trails Missouri in the SEC East standings, FPI projects that Georgia has a 60 percent chance to win the division. If Georgia makes it to the SEC Championship Game, who knows what the Bulldogs can accomplish with the dynamic running back duo of Chubb and Gurley?