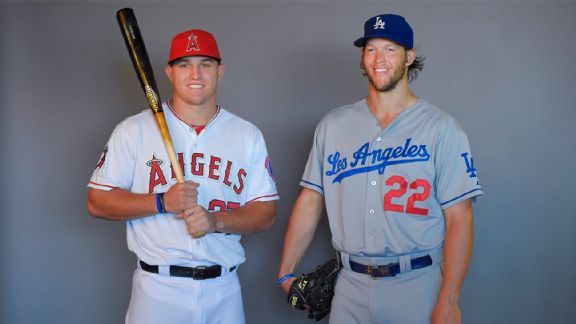 Mike Trout and Clayton Kershaw each captured the MVP award for the first time.

The MVP awards were a clean sweep for Los Angeles, as the Angels’ Mike Trout and Dodgers’ Clayton Kershaw each took home the award for the first time.

Trout finished runner-up to Miguel Cabrera in each of the last two seasons before winning this year.

According to the Elias Sports Bureau, Trout is the second player in MLB history to finish second in consecutive seasons and then win the award in the third season, joining Mickey Mantle, who finished runner-up in 1960 and 1961 and then won in 1962.

Trout led all position players in Wins Above Replacement this year at 7.9, though that was a lower total than in each of his previous two seasons.

Most Wins Above Replacement
Position Players This Season

Trout led the AL in RBI, runs, and total bases this season. He's the sixth player to do that over the last 50 seasons. Of the previous five, four were also named MVP that season.

Trout also led the AL in strikeouts with 184 this season. According to Elias, that’s the most ever for an MVP.

Trout had most of his success on pitches down in the zone this season. He hit .346 on pitches in the lower third, second-best in baseball, and had 22 home runs on those pitches, seven more than anyone else in the majors.

With a sweep of the Cy Young and MVP awards, Kershaw becomes the 11th pitcher to win both in the same season. He’s the first to do it in the National League since Bob Gibson in 1968.

Kershaw went 21-3 this season en route to becoming the 18th pitcher all time to win the MVP award. According to the Elias Sports Bureau, of the previous 17 winners, only Spud Chandler in 1943 had fewer wins (20) than Kershaw this season.

Kershaw is the first Dodgers player to win the MVP since Kirk Gibson in 1988. Since moving to Los Angeles, the Dodgers have produced five MVP winners: Kershaw, Gibson, Steve Garvey (1974), Sandy Koufax (1963) and Maury Wills (1962).

Kershaw held opponents to a slash line of .196/.231/.289 this season. His opponents’ OPS of .521 was the lowest in the majors. His breaking pitches were especially tough to hit; opponents had an OPS of .371 against his curveball and slider combined and struck out 178 times, 50 more than against any other NL pitcher.