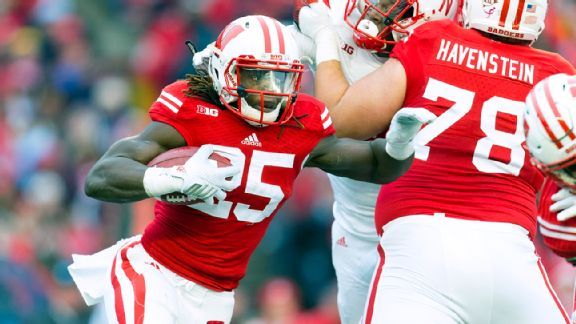 Melvin Gordon broke the FBS record for rushing yards in a game. LaDainian Tomlinson had held the record.

Wisconsin’s Melvin Gordon didn’t touch the ball once in the final quarter, but that didn’t stop him from setting the FBS single-game rushing record with 408 yards against Nebraska on Saturday. Here are the top stats to know on Gordon’s record-setting day.

* Melvin Gordon’s 408 yards eclipsed the FBS record set by TCU’s LaDainian Tomlinson in 1999 against UTEP, when he ran for 406 yards on 43 carries. Gordon eclipsed the record on 25 carries. No other rusher in the top five on the single-game rushing list had fewer than 37 carries on their big day.

* Gordon finished with 16.3 yards per carry, the FBS record for a rusher with at least 25 carries in a game. The record was held by Arizona’s Ka’Deem Carey, who had 14.6 yards per rush against Colorado in 2012. Carey had 366 yards on 25 carries that day.

* Gordon’s record means the Badgers have their imprint all over the FBS rushing records. Ron Dayne is the all-time leading rusher in FBS history with 6,397 yards, and Montee Ball’s 77 rushing touchdowns are most all-time by an FBS player.

* Just how impressive was Gordon’s day? Wake Forest has played 10 games this season and has rushed 317 times for 341 yards.