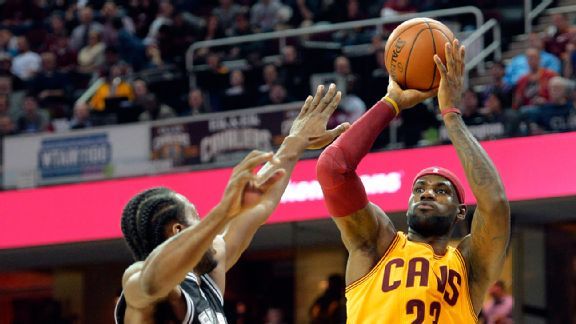 LeBron James turned the ball over with just under two seconds left and the Cavaliers down by two points. It was the first time James had a turnover in the final five seconds of a one-possession game since January 4, 2009 against the Wizards.

James finished with five turnovers on the night, his second-highest total of the season. The only game when he had more was in the season-opening loss to the New York Knicks when he coughed it up eight times.

Defense was the difference

The Cavaliers entered the game as one of the worst teams in defensive efficiency and they struggled to close out on Spurs shooters Wednesday. Cleveland contested just 16 percent of Spurs jumpers, while San Antonio contested 61 percent of the Cavaliers jump shots.

Contested jump shots are pull-up or catch-and-shoot jumpers in which the defender was within four feet of the shooter.

The Spurs adjusted at halftime to stop the Cavaliers transition offense. In the first half Cleveland scored 12 points on 5-of-8 shooting in transition. In the second half, the Cavs were held to five points in transition.