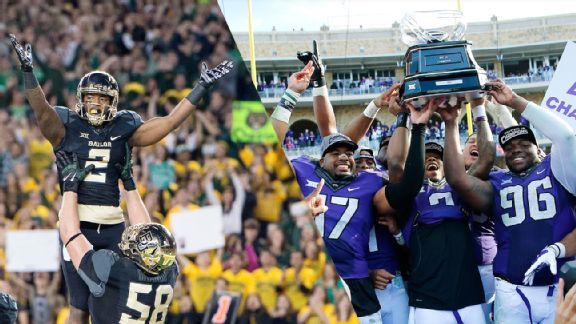 According to ESPN Stats and Information’s Conference Power Rankings, the second-best conference was left out of the initial College Football Playoff.

The Big 12 enters bowls ranked second in the Conference Power Rankings, largely because of its strength at the top. It has three teams ranked in the top 11 of the AP Poll and four in the top 20 of the Football Power Index (FPI).

When looking at conference depth, the Big 12 ranks third behind the SEC and Pac-12 with an average FPI ranking of 41.6.

The Big Ten, which grabbed the final spot in the College Football Playoff, ranks last among Power 5 conferences in the Conference Power Rankings. Three of its 14 teams – Ohio State, Michigan State, and Wisconsin – are ranked in the top 25 of the Football Power Index.

The Conference Power Rankings are not designed to endorse one team over another; each team’s full body of work must be weighed separately. It does, however, put into perspective the difficulty of achieving a team’s record given its conference schedule.

According to FPI’s projections, it is nearly as difficult (though not quite equal) to achieve an 8-1 record with a Big 12 schedule as it is an 8-0 record with a Big Ten schedule. This does not account for non-conference scheduling, which may have been a deciding factor in the CFP committee’s decision.

We will learn a lot more about conference strength during bowl season as the top conferences face each other. In the last five seasons, the SEC has a .625 win percentage in bowl games, best among Power 5 conferences. The Big Ten ranks last with a .385 win percentage over that time. These two conferences will face off in four bowls this season, including the Allstate Sugar Bowl (Alabama vs Ohio State) with the national title on the line.

The conference power rankings are a formula that equally weighs the rankings from the AP Poll and ESPN’s Football Power Index (FPI) in order to determine the best and worst conferences in the country. For more information on the rankings and FPI, click here and here.