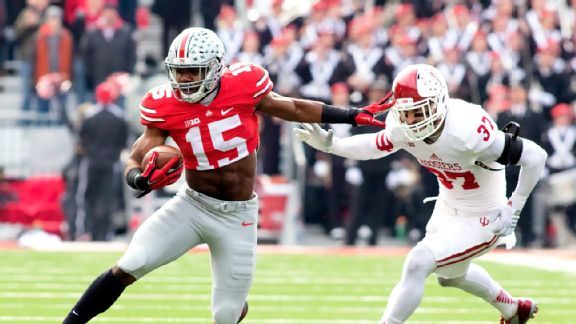 The Sugar Bowl will feature two of the most storied programs and winningest coaches in college football history. What matchups may help decide the game?

First-year starter Ezekiel Elliott has improved as the season progressed. He has run for at least 100 yards in four of his last five games after reaching the 100-yard mark in just three of his first eight.

Elliott’s improvement reached its peak in the Big Ten Championship Game, where he gained a career-high 220 yards and averaged 11 yards per carry.

In those last five games, Elliott excelled rushing between the tackles. He averaged 10.1 yards per rush up the middle, third-best among Power 5 running backs during that time.

Alabama ranks second in the FBS in rush yards allowed per game (88.7) and first in touchdowns allowed (3). The Tide are the only FBS team that has not allowed a player to run for more than 90 yards this season, and Elliot has eclipsed that mark eight times. On runs inside the tackles, Alabama has allowed a Power 5-low two touchdowns and an SEC-best 3.6 yards per rush.

Elliott has had multiple rushes of 10 yards or longer in each of his last 11 games, including a career-high 81-yard touchdown against Wisconsin. It will be interesting to see if he can break a long run against an Alabama team that has allowed the fewest 10-yard runs (34) in the nation.

Cardale Jones made his first career start in the Big Ten Championship game, and Ohio State did not miss a beat. He threw for 257 yards and three touchdowns and averaged 15.1 yards per attempt as the Buckeyes rolled to a 59-0 victory.

Jones’ deep-ball accuracy was on display. He completed three-of-five passes thrown at least 30 yards downfield, and all three completions resulted in Devin Smith touchdowns. Jones had more completions and touchdowns on such throws in the Big Ten Championship than J.T. Barrett had in any game this season. The Buckeyes now have nine touchdowns on 30-yard throws this season, which trails only Baylor among Power 5 teams.

The Crimson Tide have looked uncharacteristically vulnerable on deep balls lately. In their last two games, against Auburn and Missouri, the Tide allowed nine completions and two touchdowns on passes of 30 or more yards. They had allowed three such completions and one touchdown in their first 11 games.

Alabama vs Throws of 30+ Yards
This Season

Ohio State has been among the most disruptive pass defenses this season. The Buckeyes are tied for seventh in the FBS with 40 sacks and have recorded at least three sacks in nine of 13 games. Their opponents have been under duress on 27 percent of their dropbacks, including 26 percent against a standard pass rush.

The Buckeyes are led by Bednarik Award finalist (Defensive Player of the Year) Joey Bosa, who leads the Big Ten and is in the top five in the FBS in sacks (13.5) and tackles for loss (20.0). If Bosa and teammate Michael Bennett can get to Sims, it could go a long ways toward slowing Amari Cooper and the Tide’s explosive passing game.