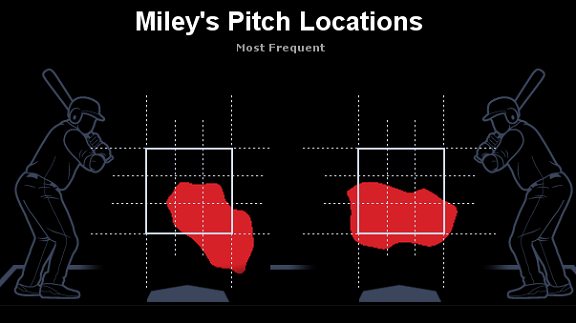 The Boston Red Sox didn’t sign Jon Lester, but they’ve reportedly added a left-handed pitcher with a skill set that is to their liking by trading for Diamondbacks southpaw Wade Miley.

What does Miley bring to his new team?

Miley is one of 15 pitchers to throw at least 190 innings in each of the last three seasons. The only pitchers younger than him on that list are Clayton Kershaw and Madison Bumgarner.

He gets ground balls because of his ability to keep the ball down. He threw 59 percent of his pitches in the lower third of the strike zone or below in 2014, the highest percentage for anyone who threw at least 100 innings.

Miley excels in controlling the running game. Baserunners are 15-of-34 in steal attempts against him for his career. He’s never allowed more than five stolen bases in a season.

Miley’s 10 pickoffs since the start of 2013 are tied for sixth in the majors.

Getting out of Arizona

Miley has been much more effective on the road than at home over the last two seasons, which is tied directly to the long ball.