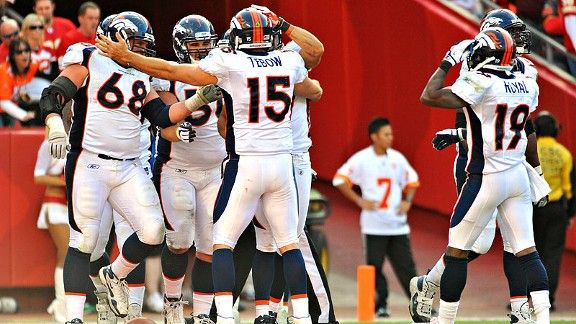 By featuring a running attack more frequently seen at the college level, the Broncos have allowed Tim Tebow to focus on his strentghs.

In Sunday’s victory over the Chiefs, the Broncos unleashed an offensive scheme not normally seen in the NFL.

With 55 rushes in the game (54 by design, 1 scramble), the Broncos set the season-high for rush attempts and a season-low for dropbacks. Since the start of 2008, no team dropped back to pass less frequently in a single game than the Broncos did in Week 10.

The four other lowest games all occurred in the last two weeks of the season, with temperatures below 40 degrees and winds over 20 MPH. When the Broncos dropped back to pass nine times on 63 plays Sunday, it was 67 degrees with winds of up to 15 MPH.

Unlike previous weeks, the shotgun wasn’t the primary source of the Broncos’ rushing attack. Entering Week 10, 52.9 percent of Denver’s rushes with Tim Tebow at quarterback were from the shotgun. On Sunday, that number dipped to 34.5 percent.

More Rushes Than Passes, Single Game
QB To Throw Each Pass In Game, Since 1973

Tebow finished the game with more rushes (nine) than pass attempts (eight). According to Elias, it was the first time since 1974 that a quarterback attempted all of his team’s passes but finished with more rush attempts. The last three quarterbacks to do so each won the game.

When the Broncos did pass, they went deep. Tebow averaged 20.0 air yards per attempt Sunday, the highest single-game total for a quarterback with at least eight attempts since the start of 2008. Tebow went 0-for-4 when using play action.

The decision to limit Tebow’s pass attempts is a strategic decision. This season, 36.2 percent of Tebow’s passes have resulted in an off-target incompletion (an under or overthrown pass), the highest rate among quarterbacks with 100 attempts. Joe Flacco is second with a rate of 26.9 percent.

Opponents regularly use extra rushers to limit Tebow’s effectiveness in the passing game. His 27.5 completion percentage against five or more rushers is the worst in the NFL this season. Only the Miami Dolphins’ quarterback duo of Chad Henne and Matt Moore has faced added pressure on a higher percentage of dropbacks.

The Broncos face the Jets Thursday night, which should be an interesting test if the Broncos continue the run-heavy approach. Since Rex Ryan took over as head coach, the Jets have allowed 3.75 yards per rush, the fourth-best rate in the NFL.