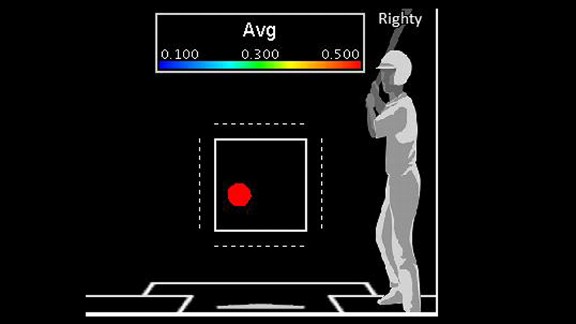 Approximate location of the 1-2 pitch from Neftali Feliz to David Freese in the ninth inning of Game 6.

The most interesting pitch to dissect from the 2011 season is the 1-2 pitch that Texas Rangers closer Neftali Feliz threw to David Freese with two on, two outs and the Rangers leading the St. Louis Cardinals 7-5 in Game 6 of the World Series.

The image above shows the location of that pitch -- a 98 mph fastball on the outer third of the plate. Our department has a pitch-by-pitch database, with which we can look at every pitch thrown to an approximate location. This isn’t perfect science, given the imperfections of the Pitch F/X system, but it’s the best we can do at the moment.

In replicating this situation -- a two-strike pitch to a right-handed hitter in which Feliz threw a fastball -- we found six pitches, prior to the one to Freese, thrown to that approximate spot. Three of the pitches were fouled away. The other three were at-bat enders.

On May 7, the Rangers led the Yankees by the same 7-5 score with two outs in the ninth inning. Feliz had a little bit of breathing room in that one, with no one on base. He threw a 96 mph fastball that Derek Jeter grounded harmlessly to short for the final out in a Rangers win.

In June, he got Jason Bourgeois of the Houston Astros to ground out to second base; in July, he got Josh Willingham, then of the Oakland Athletics, to fly out to left center. Additionally, on June 12, 2010, Feliz gave up a pair of hits to Jonathan Lucroy and Rickie Weeks of the Milwaukee Brewers on 1-2 counts.

Since then, he had thrown 84 pitches on a 1-2 count to a right-handed hitter. He allowed a man to reach base on only one of those pitches, when he hit Allen Craig with a 1-2 curveball three days prior. He got 36 batters out (two hit into double plays) with those 84 pitches and allowed no hits. Of those 36, 16 struck out, most recently Austin Jackson, who swung through a 101 mph 1-2 fastball in Game 1 of the ALCS.

On this occasion, Freese would make contact. As it had been for Freese during the postseason, it was very solid contact. By our research, and again this is very unscientific, it was the second time he made contact against a two-strike fastball thrown to that spot by a righty (he also grounded out to first base against the Brewers in April 2010).

That brings us to the second aspect of the play.

The ball took off on a path between a line drive and fly ball to right field. It had a velocity of 101.4 mph and reached an apex of 60 feet; I’m told neither number rates particularly high. It hung in the air for four seconds. And it stayed in the ballpark, and that gave Rangers right fielder Nelson Cruz a shot at catching it.

What was Cruz’s chance of catching that ball? That’s a great question, and while we can’t answer it exactly, we can touch on a few pertinent pieces of information related to it.

Cruz rated above-average via BIS's Plus-Minus metric, at catching balls hit to the deepest part of right field. Over the previous three seasons, Cruz saved his team 29 bases on balls hit to the deepest parts of ballparks, though in 2011, he was only a plus-three. There was a time in his career in which Cruz had difficulties with right-field walls. BIS has logged 12 instances since 2009 in which Cruz either went back to the fence, and missed a ball that rolled past him, or had other wall-related issues trying to make a catch. However, only one of them came in the 2011 season.

Twice in the postseason, Cruz made a catch going back on a ball hit to deep right field, once against Brandon Inge in Game 6 of the ALCS, and then again against Albert Pujols in Game 2 of the World Series.

In this instance, Cruz reached for the ball. He came very close to it but missed. Two runs scored. Game tied. A few hours later, the series was tied. A day later, the Cardinals were celebrating a championship.

It was one pitch that made the difference between baseball jubilation and baseball devastation. One pitch with all sorts of fascinating intrigue.