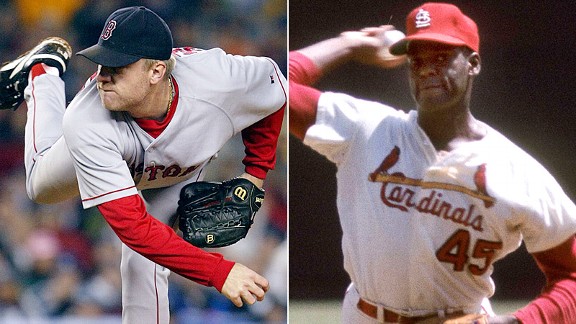 There are many ways by which Curt Schilling's best statistical match is Bob Gibson.

The answer that best supports Schilling’s Hall of Fame candidacy is to say “Bob Gibson.” Take a look at the chart on the right. That runs through the basic statistical gamut, when it comes to looking at the two side by side. The key stat is their ERA+.

ERA+ is a stat found on Baseball-Reference.com, designed for cross-era comparison. I feel comfortable in using these stats because I know they’re the kind that Schilling likes. He devised one similar to ERA+ on his blog and used it on Baseball Tonight.

ERA+ rates a pitcher’s ERA relative to his peers at the time, making slight adjustments based on the difficulty of pitching in the various ballparks of the era. It allows us to compare Gibson’s 2.91 to Schilling’s 3.46 on an even playing field, since Schilling pitched in an era that was more offensively friendly. Gibson is a 128 ERA+. That’s elite. It's tied for 13th-best among those who threw at least 2,000 innings since 1920 (or, the Live Ball Era).

In fairness, Gibson put together his ERA+ by averaging 258 innings per season over a 15-year period. Schilling reached that number of innings only three times in his career. But for those who say that Schilling was not quite the workhorse that Gibson was, consider that each was a product of the baseball environment of the times.

The point isn’t that Schilling is better than Gibson. By this standard, he isn’t. The point is that Schilling was the Gibson of his time. Since 1969 (the year after Gibson made his last World Series starts), Schilling has those three World Series starts of 74 or better. No one else has as many (for the record, Tom Glavine is the only pitcher since then with a pair of 80s or better, but this piece isn’t about him).

I’m not going to pretend that this is the perfect comparison. As my father pointed out, Gibson won with a combination of power and intimidation. Hitters feared facing him. But what Gibson had in fear factor, Schilling had in another area -- precision. He had the second-best strikeout-to walk rate in major league history.

This is not meant to be an advertisement for Schilling’s Hall of Fame candidacy. Nor is it meant to establish who was the better pitcher. We go back to the original fill-in-the-blank, and it will be interesting to see what happens when the Hall of Fame ballots are cast in 2013. Gibson was elected on the first ballot. Schilling … we’ll have to wait and see.