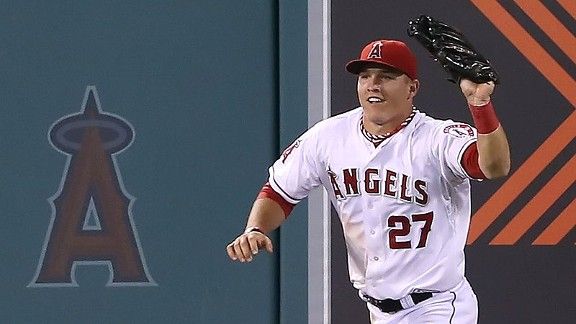 Opposing hitters saw this "look what I just caught" expression from Mike Trout many times in 2012.

Who was baseball’s best defender in 2012?

Each month during the season, we convened a group of about a dozen voters (among them ESPN.com writers, former players and those who study this material daily at Baseball Info Solutions) to pick Major League Baseball's best defensive player.

It has been a fun and educational process to study the numbers, look at the highlight reels and make a decision. (Our top candidates are noted in the poll on the right.) But when it comes to picking a Defensive Player of the Year, it’s a really close call.

Ten of us ranked the top three defensive players, and we awarded points on a 5-3-1 scale.

The winner in our voting?

Trout edged out our May Defensive Player of the Month, Mariners shortstop Brendan Ryan, who received six of our 10 first-place votes. Ryan received the other four firsts and finished second in the voting.

Simply put, Trout won our Defensive Player of the Year Award because he went above and beyond when it came to turning batted balls into outs.

Four times this season, Trout raced back to the fence, timed his leap, extended his left arm well over the wall, and came down with the baseball in his glove.

Trout robbed J.J. Hardy of a homer on June 27, stole one from Gordon Beckham on Aug. 4, snatched another from Miguel Olivo on Aug. 11 and pilfered one from Prince Fielder to end a game on Sept. 8.

But those four catches don’t necessarily tell the whole story. They account for a chunk of Trout’s 23 Defensive Runs Saved in a little under 900 innings playing center field this season.

It’s not just home runs that Trout robs. He also takes away lots of doubles and triples. He’s adept at making difficult catches like Sunday’s play against the Rangers’ Ian Kinsler look routine.

With Trout’s help (as well as that of Torii Hunter and Peter Bourjos), the Angels entered Monday ranked second in the majors in fewest doubles and triples allowed, trailing only the Tampa Bay Rays.

Baseball Info Solutions computes plus-minus ratings for outfielders based on their ability to get to the balls hit to all different parts of the field. There is a rating for shallow flies, for medium-range flies and for deep flies. A fielder is rewarded if he makes a play on a ball hit to a spot in which others usually don’t.

Trout rates as an average center fielder on shallow flies. But he excels in medium-range flies and deep flies.

Trout’s reward on medium-depth and deep balls is a big one; he’s a plus-33, meaning he’s 33 “bases” better than the average center fielder. That’s the best in the majors. The next-best outfielder, Denard Span, rates seven bases behind him.

What do you think?

The other candidates on our ballots had comparable areas in which they excelled.

Ryan’s ability to convert double plays is unmatched. Molina’s control (and basically elimination) of the running game is amazing. Barney came out of nowhere to become an all-around star. Bourn was good at getting to balls of all types.

But in the end, our voters decided that Trout was the best of the best.

Do you agree? Vote in our poll and leave your thoughts in the comments section.