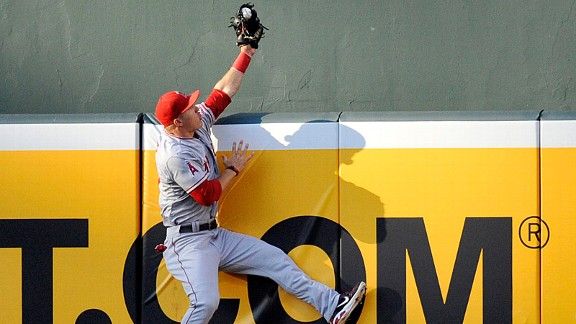 If you were to go to Baseball-Reference.com and generate a list of the players with the worst defensive runs saved totals this season, you'd see a lot of names of players whom I think we can agree do not typically perform well defensively.

But right near the very top is the guy who we named Defensive Player of the Year in this space last season -- Mike Trout.

This seems like a reasonable poster case for those who say that defensive stats are not reliable until large amounts of data are accumulated. How could Trout possibly end up on this list? And there's something to be said for that. It wouldn't be shocking if Trout performed to a level close to his 2012 numbers for the rest of 2013.

We're not saying that Trout's -12 defensive runs saved total is predictive of anything. But how could this system have so many players pegged "right," yet be so incredibly off on Trout?

Scott Spratt of Baseball Info Solutions (BIS) and I took a closer look at the data.

Here are three reasons Trout's numbers are where they are right now.

He's not making as many great plays

We'll get to the misplays shortly. But first, let's focus on the good plays, specifically those he's made in center field.

On Plays w/ Expected Out Rate

This ball hit by Jeff Keppinger is an example of a good fielding play by Trout -- think of it as the kind of play likely to be nominated as a Web Gem.

It's a ball hit to an area of the field in which it is turned into an out only 23 percent of the time when it is hit at that speed. Last season, Trout had 26 of these plays in his 885 innings in center field. This season, he managed only five in his first 355 innings since moving back to the position. In other words, he's been making them about half as often.

Most good fielding plays count for a decent amount of credit or debit in the way BIS computes runs saved. Fewer good plays is almost certainly going to lead to fewer runs saved.

BIS also looked at it in a manner that took the subjectivity of their video-review crew out, which netted similar results. That's explained in the chart on the right.

Let's be clear about something: This doesn't necessarily mean Trout is doing something wrong.

As a longtime scout pointed out to us -- playing in an outfield with Josh Hamilton in right field is a little different than playing in one with Torii Hunter. Trout's pre-pitch positioning may be preventing him from getting to some balls that he was getting to last season.

There are other possible reasons. It could simply be a small sample. It could be bad luck. It could even be something related to the early-season absence of Jered Weaver (whose fly balls tend to hang in the air longer than most and are more easily catchable) and the early struggles of Joe Blanton (whose fly balls have a lower hang time and may be less catchable).

Trout had four plays that BIS scored home-run robberies last season. In their world, those are very important plays. As BIS founder John Dewan has explained, this is the one play in which a player literally saves a run, no matter what the situation.

Those four plays accounted for 7.4 of Trout's runs saved last season -- basically one-third of his total.

Trout has not made any homer-robbing catches this season. That's not necessarily a knock against him. Homer-robs are really hard. Four in one season isn't something that is easily repeatable.

He's had a few trouble spots

Those of us who don't see Trout every day have this vision of him as being the perfect defender, and a lot of that comes from the home-run thievery and subsequent "Baseball Tonight" highlights.

But Trout is not superhuman. He's human and he's made a few more mistakes this season than he did last season. For example, on April 26, Trout dropped a routine fly ball hit by Kendrys Morales in the ninth inning of a game against the Mariners. Three days later, in the 10th inning of a game against the A's, Trout went back to the fence in left-center in Oakland, leaped and missed Chris Young's fly ball, which turned into a triple.

On May 16, Trout overthrew the cutoff man and made a wasted throw to third base, allowing Alexei Ramirez to go to second base after hitting a single. There was no error scored on the play, but even Angels play-by-play man Victor Rojas said "There's a big mistake by Trout" in describing what happened.

On May 31, Ronny Cedeno of the Astros hit a fly ball to center on which Trout turned the wrong way, misjudged where the ball was going, and slammed into the fence. The ball turned into a triple. Maybe last year, Trout catches that ball.

Some of these misplays and errors have significant consequences. The difference between a catch and a triple makes an impact in a small sample (like one-third of a season) for the fielder just as much as it does for the hitter.

Trout made two errors and 12 of what BIS scores as "defensive misplays" (such as the examples noted above) in his first 545 innings in the outfield this season. That comes out to about one mistake (misplay or error) every 39 innings, a little worse than last season, when he averaged one every 49 innings. Over a full season, that comes out to about five or six more misplays per year.

Combine that with fewer good fielding plays and fewer homer-robberies and that's going to cause a statistical drop in defensive runs saved.

So what do we make of all of this?

We mentioned that we talked to a scout -- one who has seen Trout play more than 20 times in person over the past two seasons. He was as surprised by the numbers as we were and felt they were not a good measure of his overall skills. He offered this assessment:

"The great thing about Trout is that he has exceptional baseball instincts and exceptional speed to close on balls. He has tremendous body control and great natural ability. He's very fluid in his actions and that allows him to do things body-control wise that others can't do."

So while the numbers say one thing, it doesn't sound like there is any thought that the numbers from the first third of this season will hold up for the long term.

"Put it this way," the scout said, "I'd rather he be in position to get the 27th out of the game than anyone else."