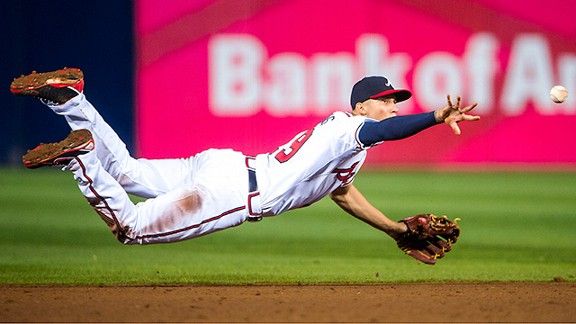 Andrelton Simmons was baseball's best defender in 2013 with plays like this.

Who was the Defensive Player of the Year in 2013?

In our view, it's not a close call. The SweetSpot voting panel named Braves shortstop Andrelton Simmons as its Defensive Player of the Year.

Simmons and Parra both finished 2013 with 41 Defensive Runs Saved, the highest single-season total in the 11 years that Baseball Info Solutions has compiled the stat.

What separated Simmons was how much better he was than everyone else at his position. No other shortstop finished the season with more than 12 Defensive Runs Saved.

Baseball-Reference.com computes the defensive component of WAR and credited Simmons with 5.4 Wins Above Replacement just for his glove work, nearly a full win better than the runner-up (Gomez, 4.6).

Simmons twice won our Defensive Player of the Month award this season, and we've provided ample description of his skill sets on many occasions. His strength is that he makes every type of play, from the routine to the difficult. He made the rest of the infield better with his presence.

Two of the stats that most validate his selection are:

1. Baseball Info Solutions’ plus-minus system calculates that Simmons made 49 more plays than the average shortstop would have made against the same series of batted balls.

2. Braves opponents reached safely on only 22 percent of ground balls hit to the left of the second base bag. That was the lowest success rate in the majors.

That's not to say that the other defenders cited weren't worthy of strong consideration.

Gomez finished with 38 Defensive Runs Saved, the most by a center fielder in the 11-year history of the stat. He robbed five hitters of home runs during the 2013 season. No other player had more than two homer robberies.

Machado led all third basemen with 35 Defensive Runs Saved and rated highest in the game's other primary defensive metric, Ultimate Zone Rating (31.2). He excelled at the flashy play, finishing with the most Web Gems in the majors.

Parra shares the Defensive Runs Saved record with Simmons after catching him with a September that earned him Defensive Player of the Month honors. Parra had the best combination of range and arm. His 130 "Out of Zone plays" (plays in locations in which a fielder turned the ball into an out less than half the time) were the most in the majors for an outfielder. He also earned 10 Defensive Runs Saved with his arm, the most of any outfielder in 2013.

Do you agree/disagree with our selection? Feel free to cast your vote here and share your thoughts in the comments.