When it has been 108 years since you've won a World Series, you should be willing to overpay to get a closer of Aroldis Chapman's ability. The Chicago Cubs will send shortstop prospect Gleyber Torres, Double-A outfielder Billy McKinney, pitcher Adam Warren and a fourth player to the New York Yankees for the flame-throwing Chapman, as the Cubs continue to remake their bullpen. 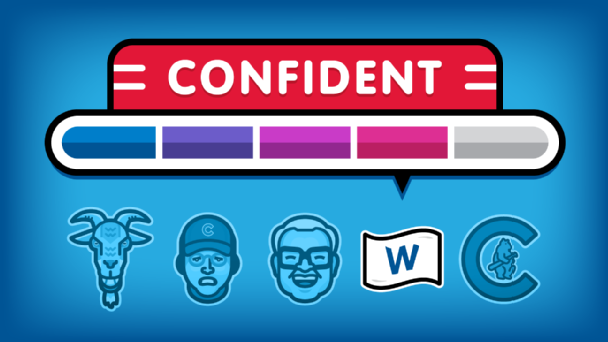 The 2016 Cubs are lifting curses left and right. Do you feel the magic yet? Cast your ballots! Cubs Confidence Meter »

Torres might develop into a future All-Star, but if Chapman helps deliver a World Series title, I'm pretty sure Cubs fans will take the trade-off.

Are the Cubs unbeatable now? The perceived weakness of the team was the bullpen, a group that has gone 12-12 with a 3.83 ERA, which ranks 14th in the majors. For most of the season, the pen looked like this:

With the way Edwards has looked since his call-up and the trades for Chapman and Montgomery (lefties have hit .176 against him), the Cubs have six quality relievers, plus the wild card of Nathan, who just appeared in his first game and struck out the side (albeit around a walk and hit). Before the trades, the Cubs had only three dependable relievers: Rondon, Strop and Wood.

It's not just that Joe Maddon has depth -- he has nasty depth. Chapman's exploits with his fastball are well-documented -- he is averaging 100.1 mph this season -- and though his strikeout rate of 36.7 percent is his lowest in five seasons, batters are hitting just .179 against him, and he has cut down on his walks, so his OBP allowed is his lowest since 2012.

Rondon won't be removed from his closer role because he was pitching poorly -- he has 48 strikeouts, five walks and a 1.95 ERA -- though as I documented last week, he has been shaky in close games. His fastball/slider combo is death to right-handed batters, who have a meager .379 OPS against him. He isn't as dominant against lefties (.611 OPS), so now Maddon can mix and match if desired.

Strop has one of the nastiest sliders in the game, and Montgomery throws 94 mph from the left side, with a four-pitch arsenal that has made him reasonably effective against right-handed batters. Edwards throws 95 with a mean curveball. The additional depth gives Maddon another bonus: He won't have to ride his starters as hard, and he can conserve their workloads so they'll be stronger in October.

The Nationals and Dodgers share the best bullpen ERAs in the National League (and the majors) at 2.98, but are you taking Jonathan Papelbon/Shawn Kelley/Felipe Rivero/Oliver Perez/Blake Treinen over the Cubs' late-game group? There's a reason the Nationals were pursuing Chapman. Dodgers closer Kenley Jansen has dominant peripheral numbers with a .153 average and a 56/7 strikeout-to-walk ratio, but he has blown five saves. His poor record in close games is reflected in win probability added, in which he ranks 33rd among relievers. The Mets have a 3.10 bullpen ERA, and Jeurys Familia hasn't blown a save all season, but the team's season bullpen line is basically identical to the Cubs':

With Chapman, Montgomery and Edwards in the mix, I would take the Cubs' pen moving forward.

On July 25, the Cubs acquired reliever Aroldis Chapman from the Yankees:

Back to the question: If the Cubs have the league's best bullpen -- in an era in which the Royals have shown you can ride a dominant bullpen to a World Series crown -- on top of the best rotation (3.04 ERA to Washington's second-best 3.43), are they now unbeatable?

Before answering, I thought I'd look at the teams with the best bullpens in recent years and how they fared in the playoffs. I used win probability added (available on FanGraphs) to pick the top three from each season.

Here's where the World Series teams ranked in bullpen WPA:

There's no doubt a bullpen can make the difference, as witnessed in last year's World Series, which turned in Game 1 when Familia blew the ninth-inning lead. But teams with bad and mediocre pens have won as well, and teams with great bullpens have melted down in October. It's all about getting hot at the right time. As good as Chapman is, he has never had a save opportunity in the postseason.

But the Cubs are undoubtedly better now than they were yesterday. They not only added Chapman but also kept him from going to another team. They seem back on track with three straight series wins. Getting Dexter Fowler back will help the offense. Anthony Rizzo and Kris Bryant are MVP candidates. The Cubs aren't unbeatable, but they again look like the team to beat.