I did this piece last year and called the Kansas City Royals my big winners -- so I was right! The Royals don't win the World Series without the contributions of Ben Zobrist and Johnny Cueto. This year's deadline lacked the potential impact stars of last year, but we still have some winners and losers to consider.

Winner: Texas Rangers -- Does this mean they'll win the World Series? Maybe. The Rangers have really outperformed their talent level so far, with a 62-44 record despite a run differential of just plus-nine. They didn't get the starter they needed, but Jonathan Lucroy and Carlos Beltran now give the Rangers a powerful lineup that goes nine deep, and general manager Jon Daniels managed to still hold on to Joey Gallo and Jurickson Profar. The bullpen has three guys poking around 100 mph in Sam Dyson, Jeremy Jeffress and Matt Bush, plus several other solid arms for depth. Sure, the back of the rotation isn't pretty, but the Rangers are now the clear favorites to win the AL West. 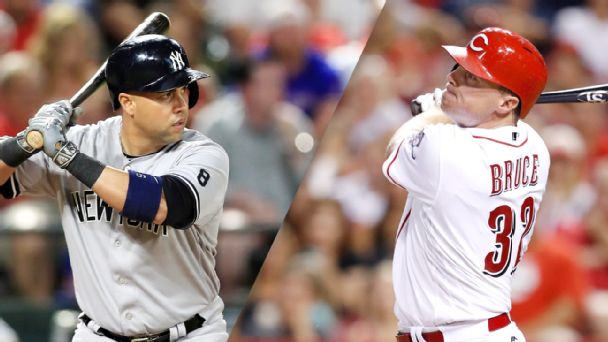 You've read David Schoenfield's take. Now, it's your turn. Which team won the deadline, and which team lost it? Vote now »

Winner: New York Yankees -- They turned Andrew Miller, Aroldis Chapman and Beltran into top-50 prospects Gleyber Torres and Clint Frazier, a top-75 prospect in Justus Sheffield and Dillon Tate, the fourth overall pick of last year's draft. A middle-of-the-pack farm system is now probably in the top five. Great job by GM Brian Cashman in turning two relievers and a designated hitter into young talent with plenty of upside -- exactly what the aging and mediocre Yankees needed to do.

Winner: San Diego Padres -- They had to flip Luis Castillo back to the Marlins for Colin Rea after Rea injured his elbow in his first start with the Marlins, but going back to the James Shields trade with the Chicago White Sox, GM A.J. Preller managed to purge his roster of high-priced vets like Shields and Matt Kemp and a possible fluke starter in Drew Pomeranz for Anderson Espinoza, one of the top pitching prospects in the game; plus Josh Naylor, the 12th pick in last year's draft. Good job by Preller to reverse course and restock the farm system after the disastrous 2015 season.

Winner: Social media! -- How did the trade deadline even exist before Twitter?

Winner: Cleveland Indians -- They didn't get Lucroy, but I still love the Miller trade, and Brandon Guyer adds a decent platoon bat for the outfield. With that rotation and now a better bullpen, I still like them as the team to beat in the American League.

Winner: A possible Indians/Rangers playoff series -- Just because I want to see Indians fans boo a guy who never played for them.

Winner: Josh Reddick -- He's watched his old A's teammates get traded away through years. Now he's on the Dodgers, possibly headed to the playoffs, and he can dream of a free-agent pay day.

Winner: St. Louis Cardinals -- The Reds and Brewers are no weaker, and the Pirates didn't make any additions, so their playoff odds improve even though they added only reliever Zach Duke. Most notable: They still have 13 games remaining against the Reds. They're not going to catch the Cubs, but you have to like their wild-card odds.

Winner: Your 2016 World Series champions, the Chicago Cubs -- Did you think we'd really forget about the Cubs?

Loser: Houston Astros -- The weekend sweep in Detroit was ugly, pushing them six games back of the Rangers, and now they just watched their big rival add three key pieces while they did nothing. Yes, they're hoping rookie Alex Bregman and Cuban Yulieski Gurriel will pump up the team's offense, but it's going to be hard to catch the Rangers now.

Loser: Dave Dombrowski -- You know the Boston GM wanted to do something else to prop up the Red Sox -- prospects, who needs 'em? -- but he was unable to swing the Chris Sale blockbuster that reportedly was under discussion.

Loser: Miami Marlins -- Rea got injured and Andrew Cashner is unlikely to make much of an impact down the stretch, and he cost them their best -- and perhaps only -- high-upside prospect in Naylor. And all for what is likely a run at the wild-card game because they're unlikely to catch the Nationals.

Loser: Jonathan Lucroy -- He'll have to play for a mere $5.25 million next season after all (once the Rangers pick up his option). He tried to play his hand, but it didn't work out.

Loser: New York Mets -- Jay Bruce has nice old-school numbers -- home runs and RBIs -- but his defensive metrics aren't good, and who is going to play center field? The Mets can still make the playoffs, but they need other players to start hitting (2.9 runs per game since the All-Star break, worst in the majors).

Loser: Yasiel Puig -- He's still with the Dodgers, but he now looks like a backup outfielder to Reddick.

Loser: Los Angeles Dodgers fans -- After L.A. didn't get Cole Hamels last season, I can already hear the whining that they didn’t get Sale or Lucroy or Mike Trout this year.

Loser: Seattle Mariners fans -- They were barely on the fringes of the playoff race and were rumored to be getting Zack Cozart, but that didn't happen. They're not a playoff team anyway, which means the majors' longest playoff drought will be extended to 15 years. When does the Seattle Seahawks ' season begin?