Congratulations to Jeff Bagwell, Ivan Rodriguez and Tim Raines, the newest members of the National Baseball Hall of Fame. Both selections were long overdue.

Bagwell, pride of the University of Hartford, is the second-greatest first baseman since World War II, behind only Albert Pujols. He hit for power, hit for average, played above-average defense and was one of the best baserunners of his generation. My favorite Bagwell stat: He scored 152 runs in 2000, still the most in a season since Lou Gehrig in 1936.

Raines became just the fifth player elected in his final year of eligibility, joining Red Ruffing, Joe Medwick, Ralph Kiner and Jim Rice. He had a terrific peak in the 1980s when he was one of the best all-around players in the game, an on-base machine who is fifth all time in stolen bases. My favorite Raines stat: Rickey Henderson would need to steal 448 bases without being caught to pass Raines’ lifetime stolen base percentage of 84.7 percent. 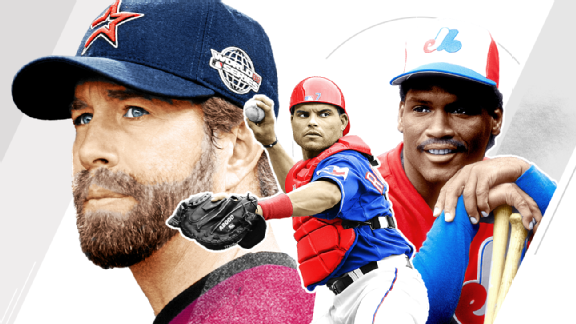 Jeff Bagwell, Tim Raines and Ivan Rodriguez are headed to the Hall of Fame. Go inside the road to Cooperstown.

• Raines finally gets his Hall moment

Rodriguez becomes just the second catcher elected on the first ballot, joining some guy named Johnny Bench. One of the greatest defensive catchers of all time and winner of 13 Gold Gloves and the 1999 AL MVP Award, allegations of steroid use weren’t enough to keep him out. My favorite Rodriguez stat: He caught 5,860 more innings than Bench.

Here’s what else we learned with Wednesday’s results: