The first baseman went 3-for-4 with his seventh home run in the Brewers' 6-3 victory over the Cubs on Monday. He's hitting .405, slugging 1.000 and leads the majors in home runs while becoming the second player in Brewers history -- Jeromy Burnitz, step on over -- to homer in five consecutive games. Since the headline on this column is "Real or not?" the obvious question: Is Eric Thames for real? My short answer: I believe so.

Do you ever wonder what the MLB home run lead looks like? Here you go courtesy of @EricThames! #ThisIsMyCrew #MILatChC pic.twitter.com/JeceG5Je20

Thames played in the majors with the Blue Jays and Mariners in 2011-12, and he did show some power, hitting 21 home runs in 633 at-bats. But he hit .250 with a low OBP and was a below-average outfielder. He spent the next season in the minors, then went to Korea. He was so good there, hitting .348 with 124 home runs in 388 games, that the fans nicknamed him "God." He had his own line of watches and wore a bright gold elbow protector. You'd think more teams would be interested in a player nicknamed God, but the Brewers signed him for three years and $16 million, chump change in today's game. 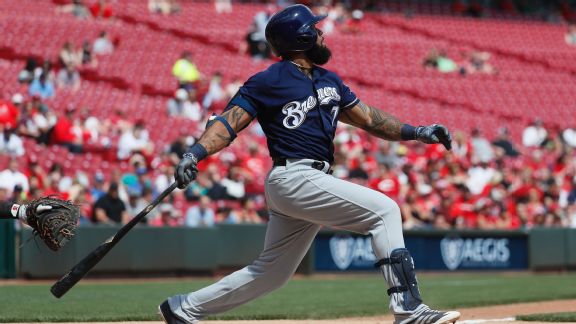 A superstar in Korea, Eric Thames is out to make it big in his return to the majors. Crasnick »

Before the season, Stearns had said "there is a wide range of outcomes" with Thames, but the statistical models forecast solid numbers (ZiPS projected .247/.321/.493 with 26 home runs). And you can bet the Brewers relied on similar models as well as the scouting reports that showed Thames had revamped his swing. The most impressive thing early on has been Thames' Joey Votto-like approach at the plate, swinging rarely (38.3 percent of the time) and rarely chasing out of the zone (15.5 percent). Compare that to 2011-2012 Thames:

The change in approach looks like the big key. Once a hacker, now he's seeking out only pitches over the plate. Check out his plate coverage so far:

For the Brewers, it was exactly the kind of signing a rebuilding team should try. They non-tendered Chris Carter, who hit 41 home runs last year, but in Carter you had a player who didn't provide much value even with all those home runs. So why not try a lottery ticket? Meanwhile, look at what some playoff contenders are doing at first base. Toronto elected to go with Justin Smoak yet again even though he's never been good; Thames has as many home runs as all of the Blue Jays. The Red Sox gave $5.5 million to Mitch Moreland, who is off to a nice start but was terrible last season with a .293 OBP; Thames has more home runs than all of the Red Sox. The Mariners are trying their luck with Danny Valencia. The Astros went with Yuli Gurriel, who looks overmatched with one extra-base hit and one walk so far. It appears Thames would have made all those teams better.

How impressive is #Brewers Eric Thames (.405, 7 HRs) Says Ryan Braun: Its as good as anybody I've ever seen at baseball for a 2 week period.

This may not be the year the New York Yankees finish under .500. With a 7-4 win over the White Sox, the Yankees have now won eight in a row, seven at home -- the first time they've won their first seven home games since 1998. Yankees fans may remember that year. Aaron Judge slugged his fourth home run and is hitting .275/.356/.650.

I wasn't sure Judge was ready to contribute after he struggled during his initial call-up to the majors last year, when he hit .179 with 42 strikeouts in 95 plate appearances. He's cut his strikeout rate from 44.2 percent to 28.9 percent, and if he can keep that under 30 percent, he's going to be a productive hitter. While Judge was blown away in the majors, his strikeout rate at Triple-A was 24 percent, which in turn was down from a 27 percent rate at Double-A and Triple-A in 2015. The point here is that while Judge has a reputation as a big swing-and-miss guy, his minor league K rates aren't horrible. Compare him to Joey Gallo, who had a 35 percent K rate at Triple-A.

I wonder if Matt Holliday has been a positive influence as well as a big guy with a patient approach who can take Judge under his wing. A couple of years ago, Judge told me at the Futures Game how Alex Rodriguez had been helpful in spring training, explaining how pitchers will attack a bigger guy. Holliday can continue that mentoring.

Mookie Betts versus Byron Buxton, a quick scientific study. Five days ago, Betts was hitting .150 and fighting the flu. Now he's hitting .325! This is why you never overreact to the first few weeks of the season. Anyway, that's now why I bring up Mookie. He's gone 123 regular-season plate appearances since his last strikeout, in the sixth inning last Sept. 12. (He did strike out once in the postseason and three times in spring training, but the record books consider only the regular season for these things. Don't yell at me; that's just the way it is.)

That's the longest streak in the majors since Juan Pierre of the Marlins went 147 plate appearances without a strikeout in 2004. Betts' streak is also the longest for a Red Sox player since Denny Doyle went 159 PAs in 1975. I vaguely remember Doyle; he was no Betts. Sarah Langs of ESPN Stats & Info reports that since Mookie's last whiff, four players have fanned at least 40 times: Byron Buxton, 49; Randal Grichuk, 44; Danny Espinosa, 44; Chris Davis, 41.

Ichiro returns to Seattle. Ichiro Suzuki made his second start of the season, and Mariners fans rewarded him with a standing ovation his first time up.

OK, this is all really just an excuse to run one of my favorite videos ever, when "Fake Ichiro" interfered with a fair ball back in 2011:

After I posted that on Twitter, however, I was told by @IchiroReport that this wasn't even the real Fake Ichiro. Apparently, there is a more famous Fake Ichiro in Japan called "Nichoro." So the guy in the video was only a fake "Fake Ichiro."