The Houston Astros have the best record in baseball, but the dream season has hit a few bumps. Starting pitchers Dallas Keuchel, Lance McCullers Jr. and Charlie Morton are all on the disabled list, along with Collin McHugh, who has been out all season with an elbow injury.

The need: another starter for the Astros

The Astros are being cautious with left-hander Keuchel (neck discomfort) and right-hander McCullers (sore back), taking advantage of their big lead in the American League West to not push them through what don’t appear to be major injuries at this time. Thanks to those two, the rotation boasts the second-best ERA in the majors behind the Diamondbacks, but you only get so many chances to win a ring. Another starting pitcher would provide some depth and probably line up as the team’s No. 3 starter in the playoffs ahead of Mike Fiers and Joe Musgrove.

Here are some of the options that might be available:

Who would say no? 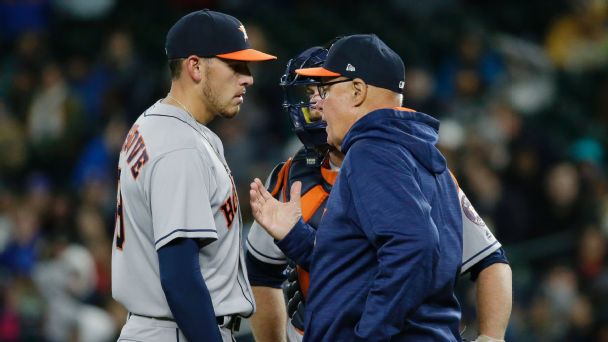 Does a trade with the White Sox make sense for the Astros? Vote at the bottom of the page »

The good news is that after battling injuries in 2016 and starting the season on the DL with a lat strain, Gray is healthy and throwing well. Would the A’s trade the right-hander within the division? Never say never, as I’m sure Billy Beane -- if he doesn’t think the A’s can compete with the Astros the next two or three seasons -- wouldn’t mind extracting two prospects and their 12 combined seasons of team control from a West foe. Still, intra-division deals are rare.

Darvish is a free agent after this season, and unless the Rangers go in the tank between now and July 31, I’d predict they keep their ace and hope to make a run at one of the wild cards.

Another would-be rental, Vargas is pitching the best baseball of his career. While his BABIP is normal, he’s still outpitching his FIP thanks to an unsustainable strand rate, and his home run rate -- especially for a fly ball pitcher -- is probably due for a spike. But if you want to bet on the hot hand, this might be the guy.

Cole is under control through 2019, so he’d be expensive even though he hasn’t pitched that well. Given his mediocre strikeout rate and home run problems so far, I’d be wary about bringing him to the American League.

So this gets us to the pitcher linked to the Astros since last offseason. From 2013-16, Quintana pitched 200 innings each season and compiled a 3.35 ERA. If he wasn’t quite an ace, his durability and consistency made him one of the best starters in the league. With a team-friendly contract that goes through 2020 for a total of $30.85 million over the final three seasons, everybody thought the White Sox would trade him over the winter. They didn’t and it might have been a mistake.

Quintana has allowed five or more runs in four of his 13 starts, with some minor spikes in walk rate and home run rate compared to his career norms. His ERA looks bad, but the FIP is a respectable 4.17, and while the extra walks aren’t helping, one reason for his high ERA is a low strand rate of 66.7 percent, significantly below his 78 percent rate of the previous two seasons.

The more you dig into the numbers, Quintana is mostly the same pitcher. His velocity is fine, his strikeout rate is actually a career high, his well-hit average is lower than his career rate. I see a pitcher who is better than his ERA and has probably pitched in some bad luck. Vargas has been better so far, but I’d probably take Quintana the rest of season.

Of course, the White Sox would love to see him reel off three or four good starts in a row to convince teams they could get the same package they might have wanted over the winter.

What do they need? Everything! The hauls for Chris Sale and Adam Eaton brought in pitching prospects Michael Kopech, Lucas Giolito, Reynaldo Lopez and Dane Dunning, with Dunning -- the least heralded of the four -- having the best season. In other words, you can never have too many pitching prospects. That’s why the White Sox should ask for Francis Martes, Houston’s top prospect. He’s up now filling in for the depleted rotation even though he was struggling in Triple-A. Still, he’s 21, and throws mid-90s with a swing-and-miss curveball.

The White Sox also will ask for outfielder Kyle Tucker, Houston’s first-round pick in 2015, but the Astros aren’t trading him. Would they part with Derek Fisher, who was tearing up Triple-A and homered in his big league debut Wednesday? I like Fisher a lot and he has the ability to help them this season. If he can handle left field, they could slide Marwin Gonzalez into some first base and designated hitter to help the offense even more.

So let’s try a different direction: The Astros also include pitcher Franklin Perez, a 19-year-old Venezuelan with an advanced, four-pitch repertoire, third baseman J.D. Davis, who is hitting .286 with 16 home runs at Double-A, but has some swing-and-miss in his game, and outfielder Teoscar Hernandez, a potential starting outfielder who reached the big leagues last season but is blocked in Houston.

What do you think? Who says no?