Eric Hosmer was the golden child, the third overall pick in the 2008 draft, the big lefty with a sweet swing. J.D. Martinez was a 20th-round pick in 2009 from someplace called Nova Southeastern University, possessing a funky-looking swing only a grandmother could love.

Hosmer reached the majors at 21 in 2011, has played in two World Series with ups and downs in his production and is coming off his best season. Martinez beat the odds and also reached the majors in 2011, was released after three seasons, changed his swing and became one of the game's top power hitters, and he's also coming off his best season. Both men are about to become rich enough to buy beachfront property in multiple states. 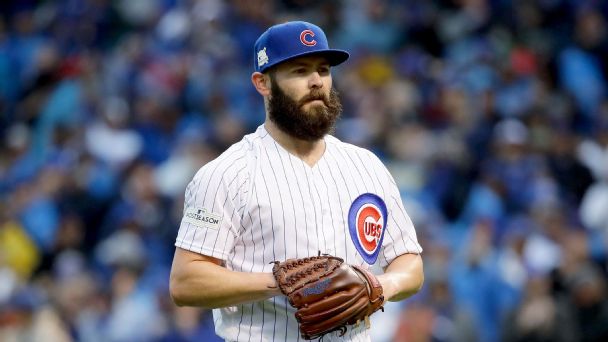 Jake Arrieta and Yu Darvish are the two best pitchers on the market. Which would you rather sign? David Schoenfield »

Who will be the best free-agent buy? Let's compare -- and you can vote at the bottom of this page.

The legion of statistical analysts working in front offices long ago poured their numbers into their programs, trying to predict the future value of these two players and arrive at reasonable contract offers. As smart as those analysts are, we know and they know that the free-agent game and world of $100 million-plus contracts are full of risks.

As Buster Olney recently pointed out, look at all the contracts given to first basemen that teams arguably now regret: Albert Pujols, Chris Davis, Miguel Cabrera, Wil Myers and Ian Desmond (if you want to consider him a first baseman). Adrian Gonzalez, after barely playing in 2017, was released after his trade to the Atlanta Braves and is still owed $22 million for 2018. Going back, Prince Fielder was worth 4.7 WAR in his final season with the Milwaukee Brewers, signed for $214 million, was worth 1.9 WAR his first season with the Detroit Tigers and was forced into early retirement after a neck injury. Ryan Howard's $125 million extension with the Philadelphia Phillies produced negative WAR over the life of the deal.

It isn't just first basemen. Look at some of the corner outfielders signed to huge deals: Matt Kemp, Josh Hamilton, Shin-Soo Choo, Carl Crawford, even Jason Heyward, though Chicago Cubs fans are happy with the ring he helped win. There's a lot of bad money in that group.

In other words, maybe there's a reason Hosmer and Martinez remain unsigned. We've heard more noise around Hosmer, with reports saying that the San Diego Padres offered $140 million over seven years and the Kansas City Royals $147 million over seven, with the St. Louis Cardinals also expressing interest. The Boston Red Sox still seem the favorites for Martinez, but if the price drops, maybe the Toronto Blue Jays, Texas Rangers or another team will end up as his surprise destination. Would you rather have a 28-year-old first baseman with inconsistent production or a 30-year-old corner outfielder with limited defensive value?

Hosmer is the more difficult player to peg; he ranked seventh among first basemen in Baseball-Reference WAR in 2017 but 18th in 2016. A .277 hitter entering the season, he hit .318 thanks to a career-best .351 average on balls in play. Hosmer's production wasn't the result of a swing change like the one that transformed Martinez's career a few years ago. Hosmer still hits a high percentage of grounders -- among qualified batters, he had the fifth-highest ground ball rate -- which is why he has never slugged .500 in a season, something 41 regulars accomplished in 2017.

From Keith Law's free-agent rankings to all the big moves, we have the MLB offseason covered.
• Complete MLB hot stove coverage »

One way to look at Hosmer's future is to examine what happened to comparable players. With help from the Baseball-Reference.com Play Index, I checked all first basemen since 1980 who had between 3.5 and 4.5 WAR in their age-27 seasons. That gave us a list of 17 players, including Hosmer. Two of those also did it in 2017: Freddie Freeman (in an injury-shortened season) and Anthony Rizzo. Another was Brandon Belt, who had 3.9 WAR in 2015 and followed that with seasons of 4.3 and 3.0 WAR. Belt looks like a good best-case scenario for Hosmer. It's worth noting that he is now entering what would be his post-free agency years, and he'll make $17.2 million the next four seasons. A seven-year, $147 million deal would pay Hosmer $21 million per season.

Anyway, here's what happened to the other 13 first basemen on that list from ages 28 to 34:

That's three really good outcomes, though Hernandez doesn't really apply: His 4.2-WAR season at age 27 came in strike-shortened 1981, and he played just 103 games. He had been worth 7.6 WAR in 1979 and 6.6 in 1980. Even Palmeiro established a higher level of play than Hosmer has achieved, reaching 5.7 WAR in his age-26 season, and of course, he has extenuating circumstances around his career. Delgado, likewise, had a 5.4-WAR age-26 season and 7.3-WAR age-28 season sandwiched around a 3.6-WAR age-27 season. Even in his best season, Hosmer reached only 4.0 WAR.

As for the others, Morneau and Mattingly had injury problems. Vaughn was good for a couple of more years, declined and then got hurt. Cecil Fielder isn't really a comparable player, and he aged poorly. Martinez, Hrbek, Karros and Davis are similar players: They were good but not great players at age 27 and ranged from average to below-average players over the next seven seasons.

To me, that's ultimately the question with Hosmer: Do you want to give $140 million to an average first baseman? You can justify a $140 million contract. If one WAR on the free-agent market is currently worth about $9 million and he averages 2.5 WAR per season over seven years, that's $157.5 million of value. It's possible that Hosmer outperforms that (maybe he even changes his swing to better tap into his raw power). It's also possible he underperforms it and 2017 proves to be a fluke season.

The pro-Hosmer fan club will also suggest that WAR is missing something -- he has won four Gold Gloves. But the defensive metrics say he's below average in the field (minus-20 defensive runs saved over his career, including minus-13 the past two seasons). They'll point to his leadership, something WAR doesn't measure. They say he has been clutch in the postseason, and while he has delivered timely hits, his career postseason line of .276/.333/.398 is slightly worse than his regular-season numbers. If you buy all those intangibles, it becomes even easier to justify a $140 million payout.

This group fared better than the first basemen, though it's important to note that Martinez would rank 14th out of the 16 in total WAR from ages 27 to 29, ahead of only Tartabull and Clark. To be fair, he missed significant time with injuries in 2016 and 2017, which depresses his overall WAR, but then again, that's part of the risk with Martinez.

The team that signs Martinez is expecting superstar-level offensive production for at least a few years. It's worth noting that with our group there's a general downward trend that starts at age 30. Look at each player's three-WAR from 27 to 29 and then from 30 to 32:

It is likely that Martinez has had his career year at the plate, and his defense isn't going to get better. If Martinez averages 3.0 WAR over six years, that's about $162 million in value.

I think both guys come with a high degree of risk. If you can get Martinez at $150 million, maybe it works out. His bat should continue to play up, however, and an AL team can hide him at DH or move him to first base.

In Hosmer's case, I'd rather spend the cash on a more reliable player or at a position more difficult to fill than first base. Between the two, I'd take Martinez. What do you think?