Everything about Vladimir Guerrero was impossible. Maybe that's one reason everyone loved him.

It's a minor miracle that he escaped an impoverished childhood in the Dominican Republic to reach the majors. It's a marvel that he became one of the best hitters of his generation considering his penchant for swinging at almost any pitch. He had those long legs that churned up ground in ungainly strides and that imperfect swing and a powerful arm that he often used with bad judgment. In many ways, there was nothing pretty about his game. But boy, was it beautiful. 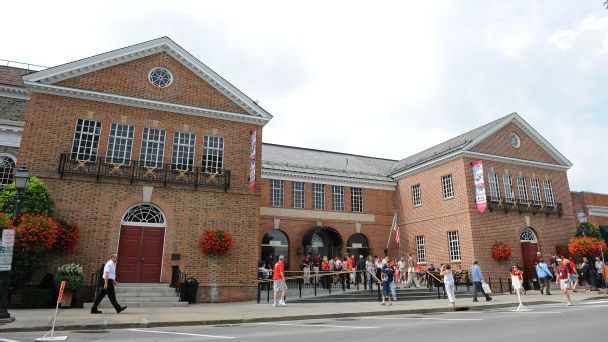 Three sluggers and an elite closer in the same class? It's going to be a crowded induction day in Cooperstown. More »

Guerrero made the Hall of Fame on his second try, after falling a bit short last season with 71 percent of the vote. He appeared on 92.9% of ballots. To be honest, Guerrero's Hall of Fame résumé isn't as cut-and-dried as that percentage might suggest.

He finished with 449 home runs and 2,590 hits, falling short of those automatic career milestones. His career WAR of 59.3 isn't slam-dunk territory and isn't even the best for a right fielder on this ballot (Larry Walker is at 72.6 and Gary Sheffield at 60.3). His run of dominance extends only 10 seasons, from 1998 to 2007. He was a terrible postseason performer, hitting just two home runs in 44 games. Heck, Jeff Kent, a second baseman, has more lifetime RBIs and is tracking at only 12 percent of the vote.

The numbers only partially tell Guerrero's story, however. He was like Kirby Puckett from the generation before or Jose Altuve right now, a player adored by fans of every team, as much for his excellence as for his uniqueness and style of play. For that to happen with Guerrero was somewhat inconceivable, given he spent that early part of his career in Montreal, when the Expos were always an afterthought in the playoff race and the only way most of us saw him in action was in highlights. While the Angels did make the postseason five times in his six seasons there, players on West Coast teams are often overlooked. Maybe that was the case early in his career; it wasn't by the end.

When Guerrero came up to bat, you didn't turn the channel or head to the concessions. Nobody had a swing like him and few produced like him. Just look at these two walk-off home runs -- you couldn't pitch to him because he could hit any pitch.

In Jonah Keri's book on the Expos, "Up, Up and Away," he tells the story of when Guerrero was first called up to the majors in 1996. Manager Felipe Alou called the coaches together. "I'll never forget that meeting as long as I live," said Jim Tracy, who was Alou's bench coach. "Felipe called the staff into his office. And with that deep-ass voice of his, I heard this message: ‘Leave him alone.' That's what he said. ‘There's going to be mistakes. The ball's not going to be thrown to the cut-off man early on. His plate discipline is going to be very raw at best. Leave. Him. Alone.'"

It's amazing he even ended up with the Expos. Dan Le Batard's profile of Guerrero for ESPN The Magazine in 2002 began: "The most anonymous superstar in sports drank from puddles as a child because he grew up with no running water or electricity. Then things got bad. A hurricane blew the roof off his family's shack, leaving only one tiny room intact amid the flooding, so that's where seven cramped family members lived, sharing two beds, whatever sugar and milk the rescue helicopters dropped and little else. Vladimir Guerrero remembers that awful smell and all those flies. Two decades later, he can still taste those damned puddles, and he takes that taste into the batting cage with him when he doesn't feel like doing the extra hitting."

Guerrero quit school after fifth grade. His family needed him to work in the fields. When he was 16, he tagged along with his older brother Wilton to a Dodgers training camp. The Dodgers signed Vlad to a 30-day contingency contract but then let him go. As Keri details, Vlad had shown up without shoes and injured his hamstring, and the Dodgers didn't know what to make of him. Vlad returned to playing baseball on the side. A few months later, the Expos discovered him.

I suppose every Hall of Famer has a unique story. Guerrero's is one of his place and his special talent. I imagine that the crowd on induction day in Cooperstown in late July will be bursting with Expos fans due to the proximity of Montreal, but it won't be only Expos fans celebrating Guerrero's induction. He was a player for all of us.