In the end, Jake Arrieta didn’t get the $200 million contract agent Scott Boras had initially sought for his client. He didn’t even get $100 million.

He did, however, agree to a three-year, $75 million contract with the Philadelphia Phillies that will make him the seventh-highest paid starting pitcher in the majors in 2018 based on average annual value. I’d suggest that’s a nice deal for a pitcher who ranked 18th in the majors in ERA in 2017, 48th in innings pitched and 24th among qualified starters in strikeout rate.

There’s an obvious reason Arrieta didn’t get the long-term deal he may have been anticipating at the beginning of the offseason. He hasn’t been the same pitcher as he was during his monster 2015 Cy Young campaign.

What this deal really signifies is the Phillies feel like they’re close to playoff contention -- maybe even this season. You don’t shell out $75 million for Arrieta and $60 million for Carlos Santana on three-year deals if you believe you’re punting the first two seasons of those deals.

Does Arrieta makes sense for Phillies? 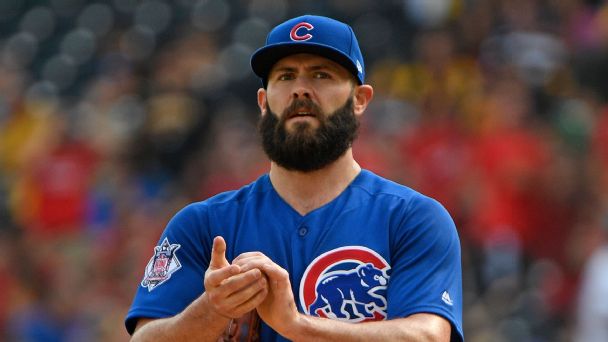 Even on a three-year deal, Jake Arrieta is a strange fit in Philly.
Keith Law (Insider)

The Phillies were a bad baseball team in 2017, finishing just 66-96 without any obvious strengths and a whole bunch of weaknesses. They were 12th in the National League in runs, 10th in runs allowed and outhomered 221 to 174. Against the five National League playoff teams, there were 17-31. But there are reasons to believe much brighter days are on the way, starting in 2018:

-- A full season from Rhys Hoskins. He’s moving to left field and the ZiPS projection has him hitting .264/.356/.513 with 34 home runs, worth an estimated 3.2 WAR. That may even be a conservative projection. Phillies left fielders actually were decent last season, ranking sixth in the majors in wOBA (with a mix of Aaron Altherr, Howie Kendrick, Daniel Nava and Hoskins), but Hoskins should provide an upgrade over 2017’s .252/.350/.442 line.

-- Santana to first base. The Phillies ranked 26th in the majors -- and last in the NL -- in wOBA at first base. Santana has been a consistent .360 OBP guy throughout his career, a big upgrade from last year’s .309 team mark. His defense also will be an upgrade over Tommy Joseph -- addition by subtraction.

-- J.P. Crawford takes over at shortstop. The bat is a wild card, but the one trait he always showed in the minors was a good eye at the plate. In his 87 plate appearances with the Phillies, he drew 16 walks and 22 strikeouts, an impressive 18.4 percent walk rate. To put that number in perspective: Among qualified hitters, only Joey Votto, Aaron Judge and Mike Trout beat that walk rate. Everyone believes in the glove. With his on-base skills and defense, he’ll be better than Freddy Galvis, and maybe a lot better if he can develop a little pop down the road.

-- Scott Kingery, super-sub. After hitting .304 with 26 home runs between Double-A and Triple-A, Kingery has been one of the most exciting players in Florida this spring. While he’s still likely to start in Triple-A, he probably won’t be down there for long. What’s intriguing is that the Phillies have moved the second baseman all over the field. As general manager Matt Klentak told me a few weeks ago, the only reason Kingery played second base in college at Arizona was because Pirates prospect Kevin Newman, a first-round pick, was at shortstop. Klentak called Kingery a plus-plus defender at second, but with Cesar Hernandez there, he has been playing some third, some center, some shortstop and could reach the majors as a Ben Zobrist-type utility guy who starts somewhere every day.

-- Arrieta to the rotation. He’ll slot in behind Aaron Nola as the No. 2 starter. Jerad Eickhoff and Vince Velasquez have tasted some success in the big leagues (more so in 2016 than 2017), Nick Pivetta struggled to a 6.02 ERA as a rookie but did average 9.5 K’s per nine, and Ben Lively also enters his second season. Adding Arrieta provides some certainty while allowing Gabe Kapler to choose from the best of the younger starters behind him. Then, waiting in the wings: A slew of high-upside pitchers that helped the Phillies rank as Keith Law’s No. 5 farm system.

They could keep a third catcher in Cameron Rupp and maybe Pedro Florimon beats out Rosales as the utility infielder.

One of the above starters could end up here and Mark Leiter Jr. fits in somewhere, maybe as an up-and-down guy. Like many bullpens, there is some volatility here, but check out the strikeout rates for Ramos and Morgan. And there is some depth. Velasquez profiles as a potential multi-inning weapon.

In the big picture, here’s what most jumps out to me: This is going to be an exciting, fun team to watch, with all that young talent to dream on. Even Phillies fans will admit: It’s the first time since the end of that great playoff run from 2007 to 2011 that this team will be interesting. Phillies attendance has dropped from 3.7 million in 2010 to 1.9 million the past two seasons. This team will help bring some of those fans back.

Will they win? One of the fascinating subplots of 2018 is which rebuilding NL East team arrives first, the Phillies or the Braves. With the Arrieta signing, I think this pushes the Phillies ahead and maybe even into the wild-card mix if the Diamondbacks or Rockies fall back. Throw in what should be a better Mets team, and the NL East, the least interesting division a year ago, now has four intriguing teams. It’s going to be a more difficult road for the Nationals, that’s for sure.

The projections I see aren’t quite as optimistic and that’s understandable. It’s a big jump from 66 wins to 86. FanGraphs had the Phillies at 74 before the Arrieta signing and Baseball Prospectus at 78. I see a .500 team, maybe a couple of wins better, and with a year of experience and payroll that will allow the Phillies to bid big in next year’s free-agent class, it could be the start of another strong era in Philadelphia.