Most who know of the Tennessee Titans defensive coordinator marvel either at his longevity (59 consecutive NFL seasons as a player or coach) or his Hall of Fame playing and coaching career (62 career INTs, two-time Super Bowl champion, creator of the zone blitz). Those who know him well describe his role as a father figure, a teacher and a storyteller. Those who have played for him rave about his ability to relate even as an 80-year-old man coaching a roster full of 20-somethings. Those who have coached with him speak about the serenity in which he leads and the wisdom he bestows upon those who surround him. 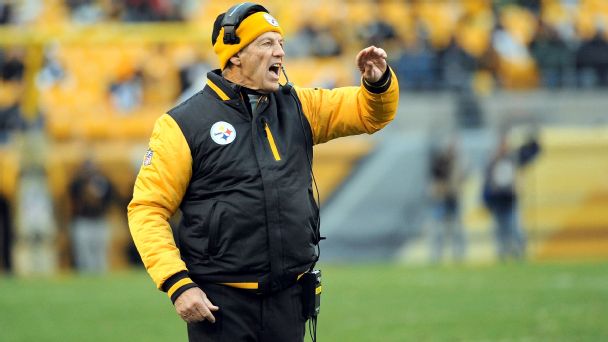 Titans cornerback Logan Ryan summed up the feeling of most who have spent time with LeBeau: "You don't know how good of a human being he is until you meet him. He's genuinely a good guy who has no bad days."

So for those who haven't met him, ESPN gathered an assortment of memories and stories about LeBeau, perhaps the NFL's greatest storyteller:

'I wanted to cry'

Ike Taylor, former CB and NFL Network analyst, Steelers 2003-14: "We were playing at the New York Jets [in 2007]. Dickie told me coming out of a TV timeout he was going to put me in a soft coverage. He goes, 'Trust your eyes because I have a feeling they're going to do a trick play.' I shrugged Dickie off. I hit him with the 'Yeah, yeah.' Well, they did a flea-flicker. Speedy Laveranues Coles lined up on my side. I bit on the play-action run. By the time, I saw the running back pitch it back, Coles got behind me. It was an 'Oh shoot' moment. He took it to the 1-yard line. Then they scored. I could feel Coach LeBeau looking at me from about 70 yards away. I tried to be the last person on the field to get to that sideline. He looked at me the whole way with an assassin look. My whole insides were hurting. I let down the team, but more importantly, I let Dickie down by ignoring him. He's seen everything, but I was being disobedient. He said this to me calmly, 'We can't win ballgames with you playing like this,' and walked off. I wanted to cry."

Cam Heyward, DL, Steelers 2011-Present: "I still miss him saying, 'What's up, Buckeye? How you doing?' ... It's weird to see him with something other than a Steelers uniform on. I'd like to think a lot of our character is made [from him]. Some of these younger guys don't really know about him, but if you spent one or two or three or four years with him, I'd like to think you grew up with him. A lot of our characteristics are Dick LeBeau-driven. Even some of our goals and stuff, they are still coach LeBeau and the way he wanted it because our coaches were under him. I think his imprint is a lasting imprint that our defense wants to reach."

Brice McCain, CB, Steelers 2014, Titans 2016-present: "It was different in Pittsburgh. When he walked through the room or started talking, everybody went quiet. You could hear crickets. No after-talk. It was weird to me at first. He was a legend in Pittsburgh. You immediately recognized how important he was to the team and franchise."

Meet me at Outback

Logan Ryan, CB, Titans 2017: "When I signed here, we went to a dinner with all the free agents that signed. Coach [Mike] Mularkey, [general manager] Jon Robinson, LeBeau and [offensive coordinator] Terry Robiskie were there. I brought my wife. So my wife and LeBeau were laughing. They hit it off talking about Outback Steakhouse, they both love Outback Steakhouse, and completely non-football stuff. My wife was like, 'I love LeBeau.' I was like, 'Do you know who that is? He's a Hall of Famer.' She was just talking about him as a person. It's a cool that he's a Hall of Fame coach and a great football mind, but he can have a conversation with my wife and make her feel comfortable about Outback Steakhouse."

Dick LeBeau in his own words

Favorite memory: "I've been in six Super Bowls. Two in Cincinnati, four in Pittsburgh, so they are pretty good memories."

Favorite player: "I've had a lot of great players that have been my honor to coach. It's hard to single out favorites, but my two Defensive Player of the Years (James Harrison in 2008 and Troy Polamalu in 2010) would be at the top of the list. And James Farrior, he should've been my third. He really was the most valuable player that year. Those are real good memories."

What do you look for in a player? "I coached Rod Woodson, and I played with Lem Barney. Anybody who displays those characteristics are what you're looking for."

How do you want to be remembered? "As a good coach, student of the game, good, honest hard-working man."

Deshea Townsend, Steelers CB 1998-2009 and Titans DB coach 2016-present: "It's how every guy, I mean every guy, wants to play for him. He still relates to guys. You know he was a DB because of the confidence and swagger that he has. It exudes off of him."

'The Night Before Christmas' tales

LeBeau recites the "The Night Before Christmas" by memory to his entire team during team meetings the week of Christmas. It was the most mentioned memory from every person we spoke to for this story. Some say that LeBeau has recited the story since he was a kid.

Wesley Woodyard, LB, Titans 2014-present: "I look forward to it every year. He gets up there and says, 'I'll put my little twist on it and you can try to tell when my story ends and when the real story begins.' The two years he's done it, he doesn't miss a word to it. I have it recorded in my phone. I listen to it every now and then when I want to smile."

Taylor: "It was like when you ask your parents for a Christmas gift. You can tell from the shape of the box that it's that Christmas gift under the tree. You can't wait to open it up. You can barely sleep. That's how it was with Dickie and them Christmas tales for the team meetings. It'd give you chills. I heard it for over 10 years, and every year it gave me a chill or two. It was his delivery."

Mularkey, Titans head coach 2015-present: "Man, I wish you could see it. It's special."

Townsend: "When I got into coaching, I wrote down as one of my goals that I wanted to coach with him and learn more from him. [When] Coach Mularkey called me and told me he was going to give me this opportunity, I had nothing to think about. He's legendary. He gives me conversations on why he did it. It's surreal to be on the other side of it with him breaking down the X's and O's. The way he can relate it to you is special. I'm afforded an opportunity that so many people wish they had being able to play for him and coach with him."

Mike Tomlin, Steelers head coach 2007-present: "One of the things I learned is if you give him red paint, he's going to paint the barn red. It's one of his analogies. He's always been sharp and flexible enough to meet the needs of the variables, meaning the people that he has versus the people that he is playing against. "

Steve Jackson, Titans assistant DB coach 2016-present: "You got a guy who's seen the history of the league since they started inflating footballs. There's not much an offense can do that he hasn't seen. Whenever we have to make adjustments or get behind, he steps up and shows himself as a leader who tells you not to worry. Just stick to the plan and everything will work out all right. I've seen that come to fruition multiple times. Dick's an amazing leader. That's why he's been doing it so long. We're trying to keep up with him now. That's what everybody's goal is, to be able to do it as long as him."