PITTSBURGH – As defensive coordinator for the Tennessee Titans, Dick LeBeau specializes in anticipation, so it's no surprise that he practically jumps on the question before it even comes out: Have you thought about this being the last game you'll ever coach in Pittsburgh?

Like a great defensive back, LeBeau swats it away: "I haven't thought anything about it." He sells it so well, you almost believe him.

LeBeau spoke with ESPN this week about some of his favorite memories from Pittsburgh -- where he coached a collective 13 years -- including their two championship seasons (2005, 2008), being given a key to the city, and having a month in his name.

"You'd have to be stupid not to remember [those things] as long as you live," LeBeau said. "I will never, ever forget the people of Western Pennsylvania."

But this could be the last time he visits. The Titans won't play another regular-season game at Heinz Field until 2019, at the earliest. At 80, LeBeau is coaching on a year-to-year basis. There's nothing left for him to prove, but he does it because the game keeps him young. 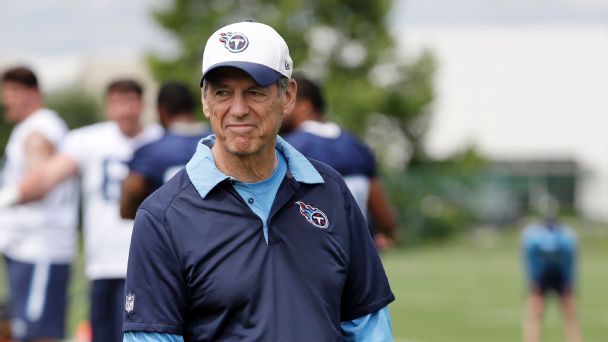 LeBeau's Titans have a big matchup against the Steelers Thursday, and it'll be the longtime defensive coordinator's first time in Pittsburgh since he last coached them in 2014.

Don't be surprised if the Steelers' and Titans' defenses look similar. They both run on defensive principles created by the same man. Both teams will certainly use some of the zone blitzes that LeBeau brought to the national scene in the early 1990s. The zone blitz is a part of LeBeau's legacy that he'll always be proud of.

"I went to a high school game a couple of years ago. I saw them running zone blitzes, and that kind of hit me like, 'Hmm, I know where that came from.' That was pretty cool," LeBeau said. "Different people put their twists on it and add to it. It's still holding up pretty good. I still see it in the NFL. Probably nothing lasts forever, but it's had a pretty good run."

That last sentence could probably be said about his career, too, whether intentional or not. Longevity is a skill, and LeBeau, now in his 59th-consecutive NFL season as a player or coach, mastered it long ago.

"Age is just a number. Now, it's a little bit bigger number," LeBeau said. "I don't see anybody walking around here 200 years old, so you have to take that in consideration."

LeBeau avoided talk of his 80th birthday in September unless asked about it. The Titans and coach Mike Mularkey threw him a surprise party during a Saturday walkthrough. It was one of the rare times LeBeau was caught by surprise.

These moments, memories and people are why he sticks around. Hey, Dick, what do you think you'll do when you decide to retire?

LeBeau pauses for a few seconds and says with a laugh, "Probably start a second career."