NASHVILLE, Tenn. -- Back in 2015, Marcus Mariota was coveted by Chip Kelly when he was the head coach and head of football operations for the Philadelphia Eagles. Kelly had coached Mariota at Oregon, where they orchestrated a high-octane offense that made them contenders for the national championship.

The Mariota-Kelly connection had the potential to be reborn in the NFL, and naturally, they were in contact throughout the 2015 draft process. 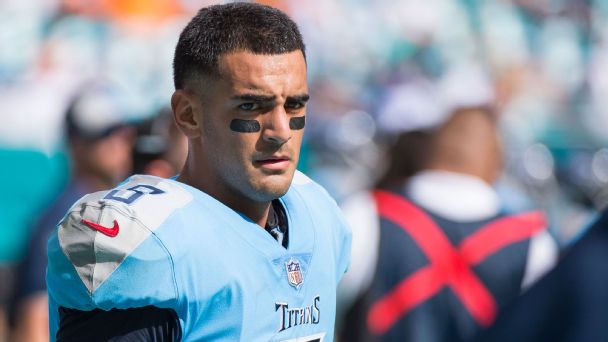 There was rampant speculation before the 2015 draft that the Eagles would try to trade up to land Oregon QB Marcus Mariota. They instead moved up for a QB in 2016. Here's what went down:

"Playing for him at Oregon, there was an instant connection there," Mariota said. "Obviously, I was able to talk with him and see them [the Eagles] at the combine. That's pretty much the extent of the pre-draft stuff. It is what it is. We kind of all have gone our different ways now."

Philadelphia held the No. 20 pick in 2015, and Eagles fans pushed for Kelly to go all-in and trade up with the Tennessee Titans to the No. 2 pick, where many felt Mariota could be selected. There was rampant speculation Kelly and the Eagles were going to move into position to select Mariota.

In June 2017, Kelly discussed the trade rumors leading up to the 2015 draft on a podcast with ESPN's Adam Schefter.

"We really didn't get into a conversation about what we can offer and what we can't offer because they made it known that they really weren't looking to trade the pick," Kelly said. "That's all speculation that's out there. You hear stories about 'we offered this, we offered that' but we didn't offer anything, because they weren't taking any offers for it, and rightly so. ... There's a reason they didn't move off that pick. It's because they had a chance to get themselves a really good quarterback."

Rather than trade up to get Mariota, Kelly traded starter Nick Foles, a 2015 fourth-round pick and a 2016 second-rounder to the St. Louis Rams for Sam Bradford and a fifth-round pick. The Titans drafted Mariota, and the Eagles stayed at No. 20 and selected Southern Cal wide receiver Nelson Agholor.

With the Eagles at 6-9 and nearing the end of a disappointing season, Kelly was fired in December 2015 and eventually replaced by current coach Doug Pederson. With Kelly gone, executive vice president of football operations Howie Roseman regained control of player personnel.

Roseman and Pederson fell in love with North Dakota State quarterback Carson Wentz before the 2016 draft, and ironically, Roseman orchestrated the kind of bold moves Eagles fans wanted the year before to move up to No. 2 from the No. 13 spot. First Roseman traded cornerback Byron Maxwell, linebacker Kiko Alonso and the No. 13 pick to the Miami Dolphins for the No. 8 pick. He then included the No. 8 pick in a package sent to the Cleveland Browns to move up to the No. 2 pick, which he used to select Wentz.

Tennessee was also busy that draft. The Titans had the No. 1 pick in 2016, and with Mariota in place, they dealt it to the Los Angeles Rams for a package of picks, dropping to the No. 15 pick. They later moved up to No. 8 to draft offensive tackle Jack Conklin.

When the smoke cleared, the Rams used the No. 1 pick on Jared Goff, the Eagles took Wentz at No. 2 and the Titans had Mariota and Conklin.

The Titans and Eagles continue to build around the quarterbacks they drafted at No. 2 overall, and on Sunday, Mariota and Wentz will duel for the first time when the defending champions visit Nissan Stadium on Sunday (1 p.m. ET, Fox).

Wentz and Mariota have a similar style of play in that they are excellent at finding big plays when they escape the pocket. They threaten defenses with their running ability, and they can make throws down the field while on the move.

Pederson is well aware of the threat Mariota presents to defenses.

"His ability to make plays with his legs is a tough thing for any defense ... It's hard to simulate in practice with all of the scrambling and the RPO, read-runs and other things they do," Pederson said. "I compare it to when you're playing Russell Wilson in Seattle with all of the moving parts and scrambling that he can do with his eyes down the field and passing that he can do. The defense has their work cut out for him. You have to stay disciplined and limit the long-distance runs that he's capable of doing."

"Mariota is probably the fastest quarterback in the league right now," Schwartz said. "You get him on the move, and he can stretch your defense with his speed. He's not easing into his [bootlegs], he's running. It looks like he's running the 40-yard dash he's running so fast."