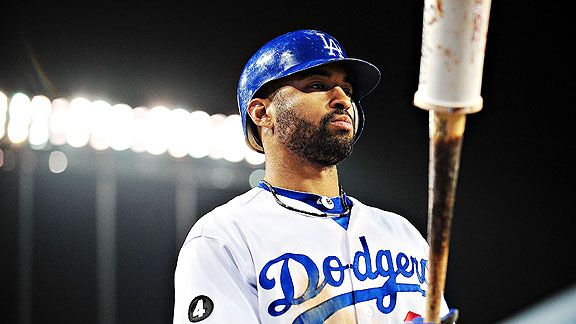 Not only is Matt Kemp on the verge of winning the first Triple Crown since 1967, but he has a chance to become only the fifth 40-40 member (home runs and stolen bases) in baseball history.

Los Angeles Dodgers centerfielder Matt Kemp has thrust himself into the Triple Crown race by his recent hot hitting, batting .600 (15-for-25) with four doubles, three HR and eight RBI over his last six games. Kemp is trying to become the first Triple Crown winner since Carl Yastrzemski (.326 BA, 44 HR, 121 RBI) won it as a member of the Boston Red Sox in 1967. If he does win it, Kemp would be the first Triple Crown winner from a National League team since Joe Medwick of the 1937 St. Louis Cardinals.

To win the Triple Crown, a player must lead his league in batting average, home runs, and RBI. Kemp leads the NL in RBI (118) and is closing in on the lead in batting average (.326, four points behind Ryan Braun) and home runs (36, one behind Albert Pujols).

One reason Kemp is in the race for the Triple Crown has been his ability to handle pitches up in the zone, especially since the beginning of August. Pitchers were able to limit Kemp’s effectiveness early in the season by attacking up in the zone. However, since the beginning of August, Kemp has improved his eye on pitches up in the zone, walking more and striking out less. He’s getting better pitches to hit too, as he’s been chasing less (but swinging more), and has added 120 points to his average while doubling his home run percentage.

What are the chances for Kemp to become the 12th Triple Crown winner since 1920 (the previous 11 Triple Crown winners were by nine players, Ted Williams and Rogers Hornsby won it twice)? The Dodgers end the season with three games at the San Diego Padres and three at the Arizona Diamondbacks.

Kemp vs Next Six Starters
Since 2009

Since 2009, of the six potential starting pitchers Kemp will face to end the season (Wade LeBlanc, Aaron Harang, Cory Luebke, Daniel Hudson, Wade Miley and Joe Saunders), he’s had the most success against Saunders - .364 BA (8-for-22), three home runs, one double, three walks and two strikeouts.

Although he’s had success against Saunders, since 2009 Kemp is one-for-seven (a single) against Saunders in pitches up in the zone. However, you need to remember that Kemp has clearly made an adjustment late in the season against those types of pitches.