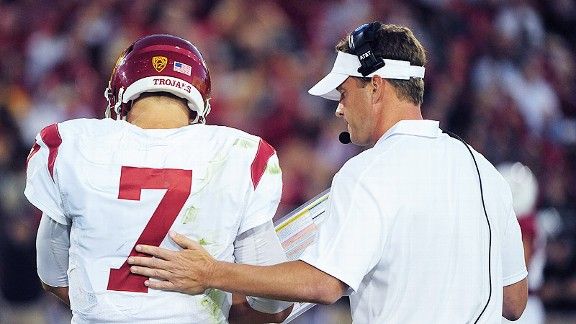 Matt Barkley fell to 0-4 in his career vs Stanford Saturday after failing to throw a touchdown.

Saturday’s slate of college football was highlighted by an upset in the Pac-12, as the 21st-ranked Stanford Cardinal defeated the No. 2 USC Trojans, 21-14. USC quarterback Matt Barkley's struggles against Stanford continued, as he fell to 0-4 in his career against the school (17-6 against the rest of the Pac-12).

What’s more, Barkley failed to throw for a touchdown for the first time in his last 16 games.

Barkley struggled most on third down, failing to collect a first down in five attempts against Stanford’s blitz. Overall on third downs against the Cardinal, Barkley went just 3-of-10, including an interception.

Barkley was also under duress on 11 of his 41 pass attempts Saturday, but the pressure generated by Stanford early in the game impacted Barkley most when he actually had time to throw. Barkley was 17-of-30 with both of his interceptions coming when not under duress. In addition, nine of those incompletions were on off-target throws.

USC hosts the California Golden Bears Saturday, and if the past two seasons are any indication, Barkley should regain some Heisman momentum this weekend. In his last two meetings against the school, Barkley has seven touchdown throws and no interceptions.