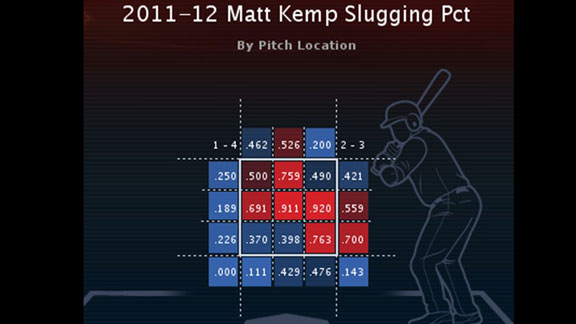 Most of Kemp's damage has been done on pitches over the middle and inside.

No team has been able to solve Matt Kemp lately quite like the San Francisco Giants.

Kemp is hitless in his last five games dating back to last season, the second-longest streak of his career. All five of those games have come against the Giants.

Kemp does the most damage to pitches middle-middle, middle-in and middle-up. His weakest zones are on the outer half.

In 2011, 41 percent of Giants pitches to Kemp were located on the outer third. In 2012 and into this season, that percentage has bumped to 46 percent. Pitches located on the inside part of the plate fell from 37 percent in 2011 to 30 percent since.

Tim Lincecum has held Kemp to a .214 average overall, but Kemp has warmed up against Lincecum lately.

One of Lincecum's struggles last year was throwing his fastball high and in to righties. As his velocity is no longer elite, that didn't really fly, and it stands to reason that it won't if he tries to do it against Kemp.

• The Dodgers and Giants have split shutouts to begin the year. They haven’t played each other in three straight shutouts since 2000 when Darren Dreifort shut the Giants out twice in a row (7/23, 9/26) followed by a Kirk Reuter shutout of the Dodgers (9/27).