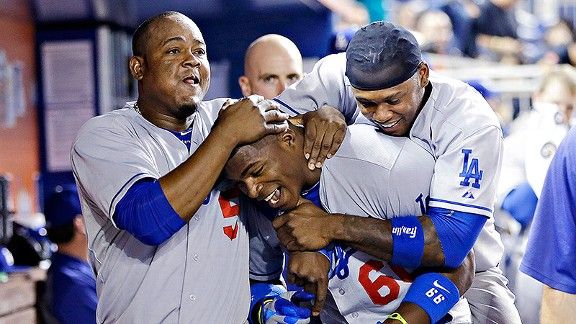 Yasiel Puig is the center of attention for the Dodgers.

A week ago, we noted the potency of Miguel Cabrera when he made contact on the first pitch of a plate appearance.

But Yasiel Puig might be even better than Cabrera.

On a night when he showed up late and came off the bench, Puig homered on the first pitch of his eighth-inning at-bat Tuesday to give the Los Angeles Dodgers another win, this one against the Miami Marlins.

Since his call-up, Puig is 29-for-46 with five home runs in first-pitch situations. No other player can rival his .630 batting average in those situations, and the only two with better slugging percentages than Puig’s 1.109 are two of the game’s top sluggers: Chris Davis and Evan Longoria.

This was another first-pitch hit against a lefty, Marlins reliever Dan Jennings. Puig is now 8-for-11 with two doubles, a triple and two homers in the first pitch of an at-bat against a left-handed pitcher.

It is admittedly very much an all-or-nothing proposition for Puig, who has missed on 34 percent of his swings in the first pitch of a plate appearance. That rate also was topped by only two players at the time we wrote this -- Pedro Alvarez and Dan Uggla.

The all-or-nothing aspect to Puig’s game seems to be true at bat and in the field. Baseball Info Solutions, which tracks defensive data for major league teams and media, had credited Puig with 25 Good Fielding Plays (think plays that would likely merit a Web Gem nomination) entering Tuesday, the most of any outfielder in the major leagues since Puig’s debut June 3.

Of those 25, 20 came on plays on which Puig either made a difficult catch or got to a ball quickly to prevent a baserunner from taking an extra base.

But Puig also was credited with 22 Defensive Misplays & Errors, also the most in the majors in that span. His most common miscues were six offline or unnecessary throws, allowing a runner to take an extra base, and four instances in which he mishandled a base hit, allowing either the hitter or another runner to advance.

Puig does have eight Defensive Runs Saved this season, the combination of turning batted balls into outs at a high rate and the value of his throwing arm when it comes to deterring baserunner advancement.

Just like with his offense, the bad stats can be frustrating, but they are outweighed by the good ones.