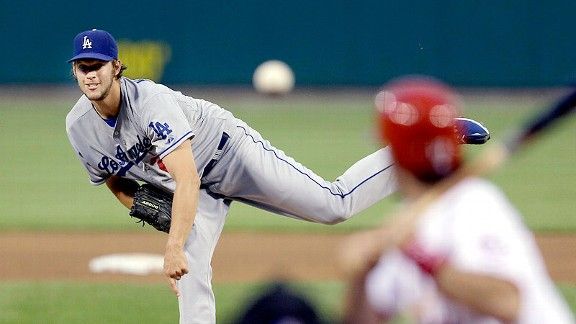 Clayton Kershaw has made things difficult for opposing hitters throughout 2013.Clayton Kershaw looks to keep his amazing 2013 going when the Los Angeles Dodgers face the Chicago Cubs tonight.

Kershaw's history against the Cubs is stellar-- he's made four starts against them and allowed two runs or fewer in each.

But what about Kershaw and big-picture history?

With the help of Baseball-Reference.com, here’s a snapshot of where Kershaw stands in statistical history with what is likely six starts left in his season.

It is extraordinarily rare for a left-handed pitcher to finish a season with that low an ERA. In baseball’s live ball era, the only one to do so was Hall-of-Famer Carl Hubbell, who had a 1.66 ERA for the 1933 New York Giants. The last before him was Rube Marquard, who posted a 1.58 ERA for the 1916 Brooklyn Robins (who became the Dodgers).

Also rare: for a southpaw to finish with that good of an ERA relative to his league. Baseball-Reference tracks ERA+, which measures that, adjusting slightly for his primary ballpark.

Opponents are hitting .182 against Kershaw this season. The last ERA-title qualifying pitcher to finish a season with that low an opponents’ batting average was Pedro Martinez (.167) for the 2000 Boston Red Sox.

The last lefthander to do so was a former Dodger, though only for a few moments: Sid Fernandez (who made two appearances for the 1983 team) held hitters to a .181 batting average for the 1985 Mets.

There have been six pitchers in the divisional era (since 1969) that finished a season with an opponents’ batting average that low. The only Dodgers pitcher among them was Hideo Nomo, whose was also .182 in his rookie season, 1995.

For those looking to make the inevitable comparison to Sandy Koufax, the Dodgers legendary lefty had one season with an opponents’ batting average that low, 1965, when opposing hitters batted .179 against him.

Kershaw currently has 188 strikeouts and it seems inevitable he’ll reach 200, perhaps as soon as tonight.

Lastly, perhaps it’s wishful thinking, but Kershaw enters tonight with a 16-inning scoreless streak. If he throws seven scoreless innings of each of his next six starts, he’ll match Don Drysdale for the second-longest scoreless streak in major-league history.

And he would be one inning shy of Orel Hershiser’s record streak. That streak began 25 years ago Friday.