Both USCs have head-coaching job openings on the same day in the middle of October. Go figure. First, Steve Sarkisian was dismissed Monday afternoon in Los Angeles -- and then Steve Spurrier decided that he would immediately retire Monday evening at South Carolina. A formal announcement is expected Tuesday morning.

The two schools will never be confused in stature or history, but that’s not to say South Carolina is a bad job. It’s come a long way, in fact. And Spurrier, a school-best 86-49 in 10½ seasons in Columbia, is a huge reason why. 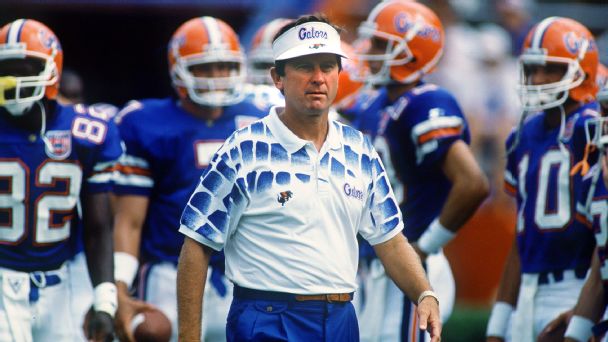 Maisel: Steve Spurrier's Fun 'n' Gun brought football evolution to the SEC
In an old-school league where passing had been an admission of weakness, Spurrier brought Florida to prominence with a new attack. 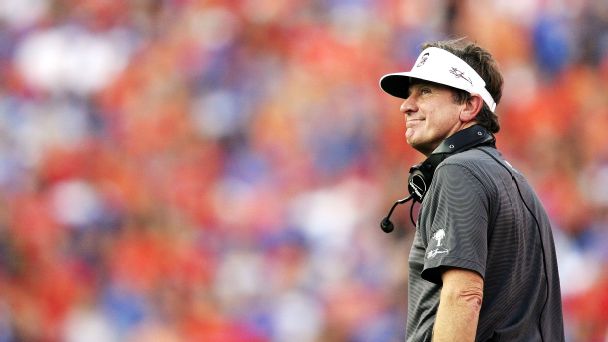 Low: Legacy of Steve Spurrier will live on long after his retirement
Steve Spurrier's most enduring legacy will be that he changed college football, particularly the SEC, with his Fun 'n' Gun offense and the way he pitched the ball around. 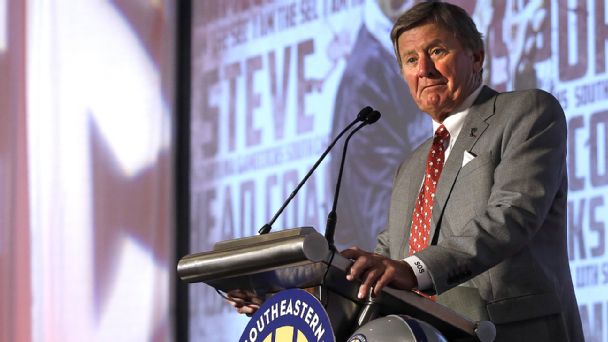 Scarborough: Looking back at Spurrier's best quotes
In light of the news that Steve Spurrier is retiring, here's a look at some of the Head Ball Coach's most famous lines.

It’s easy to forget now that he took over on the heels of the infamous on-field brawl with rival Clemson in 2004, when the schools decided to forgo bowl games as a measure of self-imposed punishment.

It then took six seasons to build a roster talented and deep enough to play for an SEC title. Auburn and Cam Newton blistered the Gamecocks in Atlanta in 2010, and it turned out to be Spurrier’s only shot at South Carolina’s first conference championship.

But the Gamecocks did win an unprecedented 11 games in each of the next three seasons. Also worth noting: South Carolina won a record five consecutive games against Clemson (from 2009 to 2013), even as the Tigers enjoyed a high level of success. That streak meant more to some long-suffering Gamecocks fans than an SEC title.

Just as he did at Duke and Florida, Spurrier established a program’s high-water mark.

The coaching success went hand-in-hand with administrations that increasingly understood the cost of doing business -- and a fan base that got on board with facilities improvements in all sports, not just football.

Former athletic director Eric Hyman, now at Texas A&M, started the aggressive facilities drive. His replacement, former baseball coach Ray Tanner, has continued it. School president Harris Pastides became a champion of the effort when he took over in 2008.

All this is to say that South Carolina has some pieces in place for the next guy, as hard as it will be to replace a legend.

In a small state -- where space and a prospect base is shared with Clemson -- it is a decidedly difficult job. But coaches see that it’s at least in the easier of the SEC’s two divisions. There’s reason to believe that the Gamecocks can remain competitive in the Eastern Division, even if Georgia is consistently good and Florida and Tennessee have made strides in returning to relevancy.

Recruiting well in-state is important, coaches say, but having signing day success in Georgia and Florida is even more important. Spurrier’s best teams had a balance of talent from those states. There aren’t enough high-end prospects in South Carolina to carry the program, especially with Clemson lurking. Regional recruiting is the key.

It’s also important to remember who is making the hire.

“You think it’s going to be that long?” he said, smiling. He then predicted that Spurrier would depart exactly the way that Tanner did: He’d wake up one day and just know it was time.

Tanner knew this was coming. He knew it when he took this job, coming off consecutive College World Series titles, that it would one day be his decision.

He’s a former coach. He’s genuine, but also a calculating, shrewd decision-maker. Without precisely knowing its contents, know that there’s a short list, and know that Tanner has a sketch of the coach he wants.

Here are the candidates who best fit that profile:

I’ve been told for years that Smart -- whose name has been mentioned in coaching searches for so long that he's almost drifted out of the spotlight -- has asked about South Carolina as a destination.

The downside: He’s never been a head coach. That did not work out well in the same division for Will Muschamp at Florida, another promising defensive coordinator candidate from the Nick Saban coaching tree. And that was with a far more fertile talent base.

Smart's case is unique, to be certain, but there’s still a recent DC-turned-first-time-head-coach stigma to overcome, especially in the same league and division. Tanner will want a sitting head coach, if possible. That’s why Georgia’s Jeremy Pruitt, another promising D-coordinator, is in a similar spot. Can you learn to be a head coach in the SEC? Maybe you can, but recent evidence in Nashville (Derek Mason) and Gainesville says otherwise.

Kentucky is 4-1 and needs to erase the bad memories of 2014, when it started 5-1, ended with six straight losses and missed a bowl game. Regardless, it’s clear to those in the coaching community that Stoops has brought the Wildcats a long, long way in two-plus seasons. The talent level is up. Fan involvement is up. UK is trending in the right direction.

His assistant hires have been particularly strong, both in terms of recruiting and on-field performance; that is bound to be meaningful in Tanner’s evaluation process.

And don’t mistake the importance of that last name. Stoops’ brother, Bob, is perhaps the most prized assistant Spurrier has ever had, going back to the Florida days. The Oklahoma coach has Spurrier’s ear, and surely Tanner will listen to a suggestion from Spurrier.

If Mark Stoops gets the Cats to a bowl game, and he should, then this is absolutely a name to note.

And an aside: Anyone suggesting his brother for South Carolina is dreaming. Bob Stoops has a far better job.

“If he didn’t leave for Florida, he isn’t leaving for South Carolina,” a head coach told me Monday, laughing at the notion. He did add that it was more likely than the “other” USC, just because of the solid AD in Tanner.

All’s fair in love and college football. Morris gained valuable experience at Clemson as the school’s ultra-successful offensive coordinator. That wouldn’t be a deterrent to Tanner or to Morris. Rather, it would be an asset.

Morris, in his first season at SMU, knows the state. He understands how to recruit in South Carolina and the surrounding region. He was the lead recruiter for Clemson star quarterback Deshaun Watson, who is from the northeast part of the Atlanta metro area.

SMU is just 1-5, but it has shown quite a bit more punch than it did in June Jones’ final season (1-11). Everyone in the sport knew Morris would have a lot of rebuilding to do. Even so, this would be an easier sell for Tanner if SMU were at least bowl-bound.

Like Morris, Herman is an up-and-comer at a Texas-based American Athletic Conference school. But unlike Morris, Herman’s team is 5-0. The life and energy he has pumped into UH and the city of Houston has been palpable for months, and that’s not the easiest thing to do in a city that is by nature more attracted to its pro sports.

Back in May, Houston netted the No. 5 overall prospect committed for the 2016 recruiting class (DT Ed Oliver/Houston Westfield). That sent shockwaves throughout the sport, signifying that Herman and his staff were for real. The team’s start, including a win at Power 5 Louisville, has backed that up so far.

Herman was previously coach Urban Meyer’s offensive coordinator at Ohio State, where he won the Broyles Award in 2014 as the country’s top assistant. Coaches have noted that his presence in Columbus has been missed.

He also recruited the Atlanta area for the Buckeyes -- something that should stand out to Tanner -- and he has spent time recruiting in Florida.

He’s going to make the Power 5 school that hires him look very wise. Tanner could easily be the one to pick up on that in an interview. This feels like a fit, even if he’s in his first year as a head coach.

Here’s one more American coach but very different than Morris and Herman. Fuente, 39, is cut from the Gary Patterson cloth. The former TCU offensive coordinator is an incredible 15-3 the past two seasons at Memphis, where it previously would have taken a decade, literally, to get to 15 wins.

But some coaches wonder whether he's up for an SEC job. They would expect him to land in the Big 12 or Big Ten, even on the West Coast, before a place like South Carolina.

Tanner might really like the no-nonsense, discipline-oriented Fuente in an interview setting, but he also might come off a bit too pragmatic. The SEC, particularly its recruiting scene, requires a relentless recruiting style that would tend to favor those such as Herman or Morris.

Want a wild card? Beamer was a South Carolina assistant who served as Spurrier’s recruiting coordinator during the program’s high point. He left in 2011 to work for his dad, Frank, at Virginia Tech.

The downside is obviously the Hokies' recent record. If not for that, he just might be in line to replace his dad in Blacksburg.

But no one outside Columbia would know the ins and outs of the job better than the charismatic 38-year-old, who was born in Charleston.