The Dirkification of Chris Bosh's arsenal
11yTom Haberstroh
Meet the Heat rookie who looks like a high schooler -- and technically still is one
Miami Heat
6hTim Bontemps
What 42-year-old Udonis Haslem means to the Heat: This is not a 'charity case'
Miami Heat
23hIsrael Gutierrez
Lowe: Ranking the NBA's best and worst teams ... and the Nets and Lakers
Golden State Warriors
23hZach Lowe
Dec 16, 2011 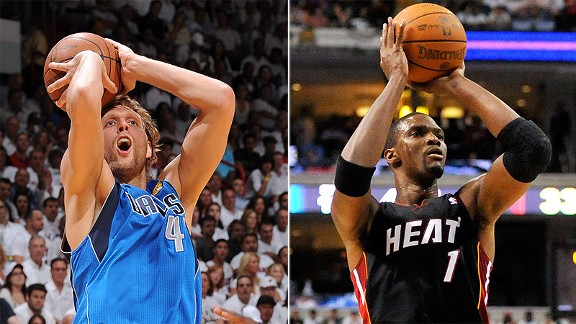 While Dirk Nowitzki crushed Miami with his 3-point threat in the Finals, Chris Bosh was taking notes.

MIAMI -- It looked like any ordinary Miami Heat attack in transition.

Early in the team's open scrimmage on Thursday night, the Heat pushed the ball up court. Dwyane Wade barreled through the paint for a signature twisting layup, but when the lane was cut off at the last moment, he kicked the ball out to the perimeter to a trailing Chris Bosh. The 6-foot-10 power forward, whose defender was too busy protecting the basket against Wade, was wide open at the top of the key. So he calmly stepped into his shot behind the 3-point line and let it fly.

What's this? Chris Bosh taking a 3-pointer? In transition?

Before you could comprehend what was going on, Bosh's shot already dropped through the net. And when he casually ran back on defense, there was no laughter or scolding from the bench. None of his teammates seemed surprised, but they were the only people in the building who didn't seem to bat an eye at what just happened.

And then Bosh shot the trailing three again later in the game. And again. And he hit them too.

And sure enough, this has been all part of the plan, months in the making. Always a sweet shooting big man, Bosh is now incorporating a three-point weapon in his arsenal. Before the lockout started, Heat coach Erik Spoelstra met privately with Bosh and encouraged him to expand his shooting repertoire in the offseason. With Wade and LeBron James ruthlessly attacking the paint, the three-point shot will be there for Bosh. If he's ready for it.

"He’s been working on that all summer," Spoelstra said after the scrimmage. "To be able to make the open – wide open – trail three, that’s certainly working for him. He’s already been very diligent on working on his shot, just to extend it another foot. He had the range, he just never really practiced it."

It's true, Bosh already has impressive range on his shot. But he wanted to be more like Dirk Nowitzki, the guy who abused the Heat in the NBA Finals six months ago. Like Nowitzki, Bosh is a sniper on mid-range jumpers. Bosh made a total of 190 shots from 16-23 feet last season, which is tops in the league for power forwards -- with the exception of, you guessed it, Nowitzki.

But unlike Nowitzki, Bosh's shot repertoire was limited to inside the three-point arc. Nowitzki attempted more than 150 3-pointers last season while Bosh tossed up just 25 such attempts, and made only six of them. Expect that number to grow this season.

"It’s like a chess match," Bosh said after the scrimmage. "It’s why Dirk is so effective because you’re not going to give him that open three. You’re not going to be a step off, but if you have your hands down, he’s going to pop you."

Bosh insists that he's never been a 3-point shooter, because the offense never really called for it. But with the Heat, there will be plenty of opportunities to stretch the floor even further. The Mavericks picked apart opposing defenses last season in the open court, not because they had explosive athletes, but because they could fill the lanes and find pockets in the opponents' scrambling retreat. When the Heat were busy trying to clog the paint and block off penetration, there was Nowitzki lurking on the perimeter waiting to catch and shoot a dagger. If he didn't shoot it, he drove past off-balance defenders off the dribble.

This is the new wrinkle in the Heat's game -- one of the many Spoelstra has implemented into the offense. The Heat have already made it clear they're trying to run more and play uptempo this upcoming season. A key part of it will be the secondary break where Bosh sneaks behind at the top of the key and nails the trailing three after the primary transition play unravels. The man who guards Bosh will be forced to make a tough decision in a split-second: Crash the paint and try to stop the LeBron-Wade attack, or meet Bosh out on the perimeter?

Fans saw this action from Bosh several times in the Heat's open scrimmage, but was it just some goofy occurrence of what was essentially a glorified practice?

"No," Spoelstra asserted. "That’s something he’s been working on. And I like it."

When someone asked Bosh after the game if the 3-pointer was just a small tweak to his game, Bosh didn't downplay its significance. The 27-year-old has been itching to bring back this part of his game ever since he left George Tech in 2003, where his coach Paul Hewitt - who's now roaming the sidelines at George Mason -- taught him how to take advantage of his range in the fastbreak. Bosh took more than a 3-pointer per game during his one season in a Yellow Jacket uniform, and made a blistering 48 percent of those attempts.

"I used to shoot the three in college," Bosh remembers. "That transition, secondary break, you use it like a weapon when everyone collapses. You come right down the court and step right in to it. Our coach down there at Tech worked on it all the time with me on it."

Don't expect Bosh to turn into Ray Allen this season, but the shot expansion will only help the Heat sharpen their attack. As someone who effortlessly drains 20-footers, Bosh has always been a prime candidate to step back behind the line and become more efficient with his shot selection. The mid-range shot is, percentage-wise, the worst shot in the game, but if players can step back a couple feet and get that extra point? It adds up in the long run.

If you look closely at the Heat's shot repertoire last season, you'll notice a huge portion of them coming in the mid-range. In fact, 29.2 percent of their shots come within 16-23 feet, the second-highest percentage in the league behind the Atlanta Hawks. And Bosh fired off 5.5 of those shots per game, more than any other Heat player last season.

If Bosh can trade one or two of those shots every game for a 3-pointer like Nowitzki does, the Heat's offense will become far more potent than it already is. Not to mention the subtle benefits of dragging defenders away from the paint just by the mere threat of nailing a 3-pointer. Exchanging mid-range jumpers for three-pointers is one simple way teams can trim the fat in their offense, as the Chicago Bulls learned last season with Luol Deng and Derrick Rose.

With LeBron and Wade flying down the lane like a freight train in transition, the Heat were pretty much unstoppable in the open court. Now, the Heat are aiming to use Bosh also as a 3-point safety valve, much in the same way Nowitzki terrorized the Heat just a few months prior.

"It’s going to be open because we have so many attackers," Bosh said.

"We can start out this year and make defenses panic."